Grog with a New Twist

Grog is a curious mixture of rum and water with a little lime to cut the foul taste of the water that was carried in casks aboard the ships in the 1700's.    The Name Grog came from the nickname that Vice Admiral Edward Vernon had because of the coat that he wore made of "Old Grogram" or "Old Grog".   More modern recipes include boiling water, lime juice, Cinnamon, sugar, all to improve the taste of the rum.   In most of the English speaking world, Grog is a rum based alcoholic drink.    To the Swedish it can be a mixture of any spirit and a soft drink and with only one spirit in the blend. 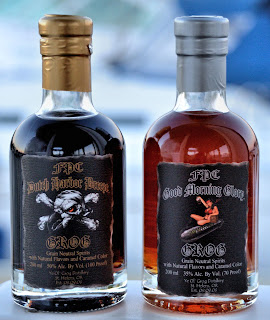 This brings me to today's story.   There is a group of guys that were "sitting around drinking some Coronas and telling lies", when they got this idea to start a new business.    Marcus Alden, Lloyd Williams, Greg Scott and Ken McFarland "took the bull by the horns", if you will and built their own distillery and developed their own "grog".   The boys all had strong engineering and distillation backgrounds and were able to create a reflux column still and a more traditional pot still.  Ye Olde Grog Distillery of St. Helens, Oregon was born.  They  make whiskey, vodka, and a pair of grogs.

The Dutch Harbor Breeze Grog is a 100 proof Whiskey based grog that was named for "it's smoothness.  The 70 proof Good Morning Glory Grog, a vodka based grog sweetened with blue agave nectar and four natural flavors.   Both of these are young spirits that are colored with caramel.   They were aimed at the college aged crowds in Oregon originally, but now they have reached the east coast and the Florida Keys.   Though not in the true grog spirit (not made from rum), they are a good mixing spirit that can fulfill the spirit side of a good cocktail.   The marketing and the packaging of these grogs is very unique and shows a great deal of creativity as does the entire program.  ;o)
Posted by Bahama Bob's Rumstyles at 8:19 AM 1 comment: