There is a New Zombie in Key West

The "KeyZombie" is officially ready for consumption by the drinking world.     After several days of  rum research and development with the help of my friends Mike, Bruce, Marta, and Lauren, we have a new Zombie.     We developed this new Zombie with a Key West flavor, while trying to keep the integrity of Don the Beachcomber's original cocktail.    Like Donn Beach's original this one packs a wallop, but the wallop is not very unnoticeable as you drink it.    This is the trademark of most of my cocktails, having an appropriate amount of liquor without having the strong liquor taste. 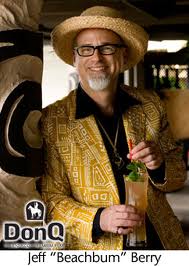 I felt that after listening to Jeff "Beachbum" Berry's lecture at "Mai-Kai's" last month it was time to create a "Southernmost Zombie" that we could have some fun with down here is the Keys.     It was time to get back into my laboratory on the back of the boat and start some serious research.     Mike Streeter and I spent several hours last week working on the project.     We felt like we were very close, but it was lacking something.     Sunday afternoon at the Rum Bar, I was talking about our new Zombie to several of the bar patrons and they asked for me to make them one of the new "KeyZombie's", so I did.     I made a little adjustment to the recipe to see if it would take care of what was missing.     I felt that I was on the right track judging from the response from the patrons.     Monday afternoon Mike and Bruce and I went into the laboratory and tried the new version and were pretty happy with it, but something was still missing.     Four adjustments later, we stumbled on the "secret ingredient" that brought the "KeyZombie" to life.     After taking the final mixture to our bartender friend Lauren  to taste, she felt that we were right on track also.     Lauren and some of the other bar people's opinion said "it is Right-On!"

The KeyZombie is available at the Rum Bar in Key West, but only between 11AM and 6PM Wednesday through Sunday, if you would like to have one.     Seeing how I am the only one with the recipe, I'm the only one that can mix one up for you.

﻿﻿
﻿﻿      There are three other new KeyZ cocktails that are currently under development that hopefully will be available in the next month or so.     There will be a book coming out, hopefully by the end of the year that will contain all of my favorite and many of my original recipes along with stories of where and how the drinks came about.    This is proving to be a very enjoyable adventure putting these stories,drinks, and recipes together for the book.     The travel and the lab time are the  most fun, but lab time is very limited when developing high potency drinks like the "KeyZombie" because you can only do about three or five rounds especially if you are using the scientific method of A B A to verify your results.    I barely survived Monday's session, but the results were worth the "BUZZZZZZZZZZZZZZZZZZ" .      Look at Rob V. Burr and see what Zombie Research can do to you.         ;o)
Posted by Bahama Bob's Rumstyles at 9:10 AM No comments: