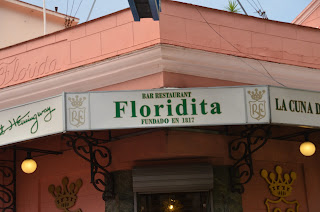 The Cuban home of the Daiquiri turns 200 in 2017, a milestone that I wish I could be there to celebrate.

Daiquiri Season is upon us and it is natural that our thoughts to go the cradle of the daiquiri, El Floridita in Havana.  This month marks the 200th anniversary of the El Floridita's.  The iconic bar and restaurant first opened it  doors in 1817 as La Piña de Plata (the silver pineapple) in the same location where the bar is still located today on the corner of Obispo and Monserrate Streets just a few blocks from the Square in Old Havana.
The bar drew international fame thanks to the hard work of Constantino Ribalaigua Vert, a Catalan immigrant that got his start as a cantinero (bartender). It was Vert who turned the bar into a daiquiri destination and invented the Frozen Daiquiri in the 1930s.
El Floridita has become a magnet for noted authors and famous dignitaries from around the world.  Ernest Hemingway, virtually made El Floridita his home in the Forties, he famously requested his daiquiri with no sugar and double the rum, that would become known as "Papa Doble" or Hemingway Special.
My friend Julio Cabrera, first brought me to the El Floridita in 2013. Julio Cabrera is a Cuban “cantinero” who resides in Miami and considers himself the unofficial ambassador to El Floridita.  He brings international bartenders to Havana for cultural exchanges.  Cabrera says, "Every time I take American bartenders there, the El Floridita's cantineros put them behind the bar and teach them how to make the daiquiri in a blender. Having done this myself, it was very exciting and fun, but learning to make the “Papa Doble and the El Floridita Daiquiri was priceless. "The bar is 100 percent hospitality. It's not just about the daiquiris. It's about the profession and the cantineros. It's one of the best bars in the world." 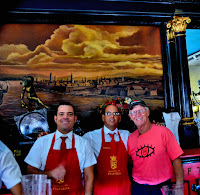 Hopefully the El Floridita whose fame came to light when Ernest Hemingway and his love of daiquiris,  remains one of the strongholds of Havana cocktail scene.  I have to say that I never miss a chance to visit El Floridita when I'm in Havana.  You will never be treated any better or get any finer daiquiri.

Posted by Bahama Bob's Rumstyles at 5:04 AM 2 comments: