Talking urinals are the latest weapon to be used in the battle against drunk driving.    This is a program that has been used in Detroit and several other regions around the United States.   In a press release from Wizmark Urinal Communicators it ells of how it is being used in New Mexico. 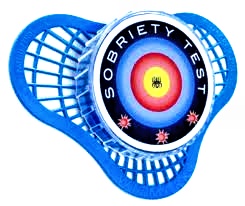 Islip, NY, February 14, 2007 B Innovative pro-active state traffic-safety officials in New Mexico recognize talking urinals offer a unique way to reach men with a Drink Responsibly message. Attracting the attention of the elusive male drinking demographics has always been a challenge for the New Mexico Department of Traffic Safety. In their continuing efforts to get the word out that drunk driving won’t be tolerated they have initiated a pilot program featuring  Wizmark®Urinal Communicator to be distributed free to bars and restaurants located within the state. Their intent is clear as demonstrated by their message “You Drink, You Drive You Lose.”
The men's rooms offer one relatively untouched ad vehicle that just about everyone who enters it faces: the urinal. The patented Wizmark® Interactive Urinal Communicator is positioned within the urinal and directly above the drain.  By sheer logistics, this strategic location immediately attracts the viewer’s attention to the public service announcement contained within. The device automatically recognizes the presence of a “Visitor” and after a brief delay allowing the viewer to get properly positioned, proceeds to emit a very audible pre-recorded 16 second message stating “Hey there big guy, having a few drinks? Then listen up! Think you had one to many? Then it’s time to call a cab or ask a sober friend for a ride home. It sure is safer and a hell of a lot cheaper than a DWI. Make the smart choice tonight, don’t drink and drive! Remember, your future is in your hand"

This is a plausible idea that might have some merit.  It has to be a surprise when you are "half in the bag" and  have the urinal start talking to you, at that point you might even listen to the urinal.     I do believe that if it gets even one person to take a cab or some alternate transportation rather than driving, it is well worth the investment. 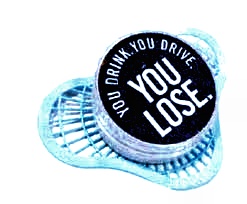 I believe that no matter how you keep impaired people off of the road, it is a good thing.  Here in Key West is is done post problem, in that the local and state police are very vigilant in removing drunk drivers from the road.  It is my belief that you can save yourself about $30,000 by listening to the urinal.     Give some thought to it, will not only save you money, it may save your and my lives.    ;o)
Posted by Bahama Bob's Rumstyles at 8:11 AM 3 comments: