This Blog has "Gone to Hell"

No, I didn't just make a pun out of a title, I went there in July.   Hell is a little wide spot in the road in the West End of Grand Cayman.    As I left Georgetown and headed up to West End, I found myself "on the road to Hell"

"Whatever lies behind the name, it’s definitely an appropriate one. The black, jagged rock formation gives an intimidating impression of what Hell may be like.   These jagged rock formations occupy an area around half the size of a soccer field. Walking  among the rocks is no longer permitted, to prevent any further damage to the site.    However, two observation platforms give a fascinating view of Dante's Landscape. 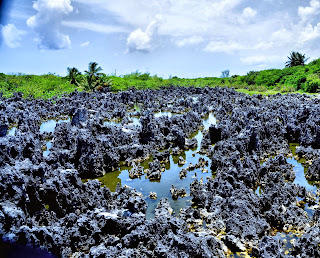 The rock outcrops are not lava, despite the appearance of same. They are limestone and dolomite that has been eroded over the years by algae.  The resultant land form is called a phytokarst. The algae attacks the calcium in the limestone leaving "the devil's garden" made up of the harder dolomite. These shapes are what you can see in Hell today. There is no more erosion expected, because the algae requires water to stay alive. The rock was originally bright white in color, but has been blackened by the algae, giving rise to its devilish look today.
The Hell Post Office is one of the biggest attractions in Hell.  You can send all of your friends a "Post Card from Hell", as I did and so many others as well.   All in all quite a unique experience, "going to Hell".  I guess you can say it was a "Hell of an experience".   Maybe I need to "get the Hell out of here" and put this blog to bed.