The Aviation is another of the mysterious classics that there doesn't seem to be an answer as to who was the original creator, but one that has been with us since the time of the first airplanes.

According to David Wondrich's Imbibe!, it was first printed in a 1916 book by Hugo Ensslin called Recipes for Mixed Drinks.   The cocktail has passed in and out of popularity over the past century, and seems to be making a comeback again.   I keep hearing about the Aviation Cocktail at the Rum Bar, so I decided to do some research into it and I found the Hugo Ensslin recipe and decided to work with it a bit.
Hugo Ensslin's Avaiation
·         1½ oz. El Bart gin
·         ¾ oz. lemon juice
·         2 dashes maraschino liqueur
·         2 dashes crème de violette , a violet liqueur which gives the cocktail a pale sky-blue color.
As usual I found a way to recreate this recipe using rum.   I found that Brugal's Extra Dry Blanco was ideal for the task.     The rum is lacking some of the botanical flavor of the gin, so it was necessary to add a dash of Fee Bros. Gin Barrel Bitters to fill the void. 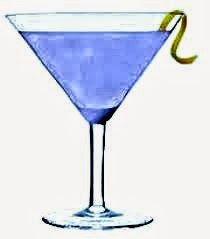 Brugal Avaiator
Pour the ingredients into a cocktail shaker filled with ice.    Shake well until chilled, and strain into a chilled Martini Glass, and garnish with a lemon zest