Today is National Daiquiri Day, the day to celebrate the famous cocktail named for a beach near Santiago, Cuba.  Believed to have been first created by an American Jennings Cox, a mining engineer,  who was in Cuba during the time of the Spanish - American War.   Originally served in a tall glass to his guests at cocktail parties, this cocktail spread far and wide with it's introduction to the Army - Navy Club in Washington  D.C. and a 1937 article about the Daiquiri in the Miami Herald.

The creation of the frozen Daiquiri is speculated to be that  of Emilio Gonzáles, at the Plaza Hotel in Havana, Cuba.    Constantino Ribalaigua of Havana’s El Floridita bar through his relationship with Ernest Hemingway who had moved to Havana in 1932, took the Daiquiri to the next level who after adapting this drink to Hemingway's taste. 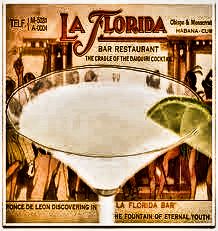 There are many versions of the daiquiri out there, many are from "slushy" machines, but if the follow the original idea of "something strong, something weak, something sour, and something sweet", it is going to be along the line of what a daiquiri is suppose to be.   Probably the most famous of the daiquiri's is the "Hemingway Daiquiri "otherwise known as the "Papa Doble".   Created in Havana by Constantino Ribalaigua, "the king of the daiquiri", at the El Floridita in the early 30's.  Cuba was a bastion for thirsty Americans during prohibition era years.  Drawn by the famous bars like the Jockey Club, Sloppy Joe's, but for the lovers of the daiquiri, there was the "La Cuna del Daiquiri", the cradle of the daiquiri, El Floridita . 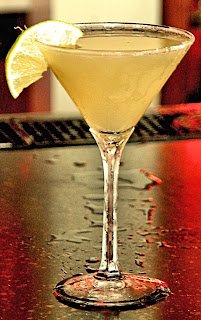 Today is the day that we celebrate the work of all of these people by enjoying a real daiquiri at home or at your favorite watering hole.    There are many varieties of the daiquiri including one that I have created for you at the Rum Lab.

Bahama Bob's Daiquiri
Place all of the ingredients into a shaker filled with ice and shake until chilled.  Strain into a "Martini Glass" and garnish with a lime and a sprig of mint.

No matter how you like your daiquiri, today is the day to celebrate them.  Stop by the Rum Bar Key West and enjoy any number of them on this "National Daiquiri Day".   ;o)


Posted by Bahama Bob's Rumstyles at 9:10 AM No comments: