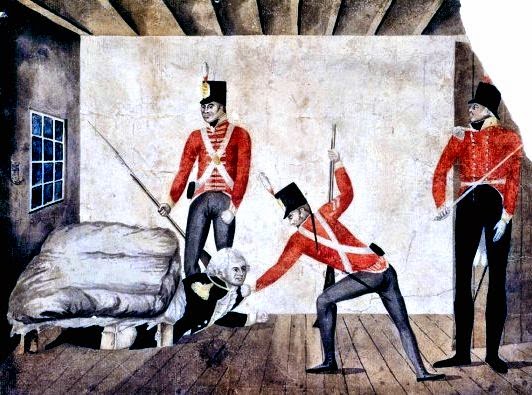 The “Rum Rebellion” in fact had many causes but it was Governor William Bligh’s attempt to stop the essentially illegal rum trade that was controlled by the local militia that proved the final straw.   In fairness to Bligh, he was merely carrying out orders from the Colonial Office which wanted to normalize trading in the colony which had been formally founded just 20 years before.
Yet Bligh, already infamous the inciting a mutiny on his ship The Bounty, was an abrasive character in his own right. On his trip to Australia to take over as governor he had chafed at command of the convoy being given to a junior naval officer, Captain Joseph Short, and so willfully disobeyed his orders (which led to Short firing a literal shot across his bows) before finally arresting Short and taking over the little convoy himself.
His attitude in Australia did not endear him to many.   He arrived in Sydney in 1807 and his dictatorial manner made him powerful enemies.  He dismissed important men from their positions for no reason, he stopped giving land grants to the powerful – and gave them to himself instead, he evicted the poor and appropriated their land, he imprisoned those who wrote to complain and then he tried to stop the New South Wales Corps’ rum trade which made its members and local businessmen large profits.
Matters when he came to a head when Bligh clashed with the irascible John MacArthur, a part-time officer in the Corps and burgeoning wool tycoon with considerable interests in the rum trade.   A disagreement over landing regulations led to MacArthur’s arrest. He was bailed on 25 January and the next day, under threat of arrest, he and supporters from the Corps and other prominent colonists marched against Bligh when he accused them of treasonous actions.  Marching to Government House with colors flying and band playing, Bligh was found hiding under the bed.  A rebel government was established in which MacArthur played a key part.
After a period of house arrest Bligh was sent back to Britain, though he unsuccessfully tried to get help from the lieutenant-governor of Tasmania to help reinstate him on his way back.
Read More at:   http://www.thedrinksbusiness.com/2015/01/on-this-day-1808the-rum-rebellion/
William Bligh never seemed to be able to get the respect that he should, but when it comes to controlling the availability of liquor to the people, you don't want to say NO!  ;o)
Posted by Bahama Bob's Rumstyles at 7:00 AM No comments: