The United Kingdom’s Spirits Market Has Changed in Six Years 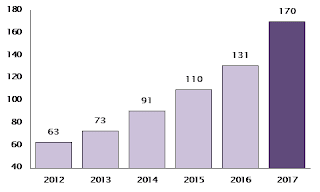 The number of distillery businesses in the United Kingdom has jumped 30% in just a year, according to new figures suggesting the UK is on the brink of a ‘Rumnaissance’.  Spirits of unusual and innovative flavors have grown in popularity, particularly among young consumers, as has the preference to ‘buy-locally’ from smaller, urban breweries and distilleries.  The number of distilleries registered has nearly tripled since 2015, according to the figures, with the number of new entrants rising at faster rates with each passing year.

Smaller, independent alcohol brands that have generated high sales growth and achieved premium   Halewood Wine & Spirits, meanwhile, acquired the Cornish spiced rum brand Dead Man’s Fingers earlier this year.  But while the spirits industry looks to continue its growth, James Simmonds, partner at UHY Hacker Young, identified current sales figures which suggest the UK is about to undergo a “Rumnaissance” which mimics the growth of the gin category over the past decade.  Rum sales in the UK hit £1 billion in 2017, up from £960million in 2016, according to the Wine and Spirits Trade Association.  “The growth of the UK spirits industry looks to continue into 2018 as consumer demand for premium priced spirits, an increase in M&A activity, and the rising number of distillery businesses shows no signs of slowing.”
pricing have become attractive M&A targets for larger companies.

New rum-focused enterprises have launched this year, both in the on and off-trade. Last month, a family of four running their own micro-rum distillery in London relocated to Scotland, having secured £100,000 to begin building a state-of-the-art facility Livingston, West Lothian. The owners have predicted a 400% increase in annual turnover.   Atom Brands, the company responsible for That Boutique-y Gin Company, extended its collection of limited edition small batch casks to rum last month.  The range comprises of rare bottles and aged rums from exciting or long-lost distilleries, including the Caroni Distillery in Trinidad and Monymusk in Jamaica, as well as unexpected finds such as unaged offerings from O Reizinho Distillery in Portugal. There will also be a selection of top secret distillery bottlings aimed at the most devoted collectors.

Posted by Bahama Bob's Rumstyles at 5:07 AM No comments: