The Blue Moon of August

Tonight there will be a Blue Moon rising in the sky.    This is an unusual "Blue Moon" in that it is the first full moon of August.  How can this be, the "Blue Moon" is suppose to be the second full moon of a particular month.  This is true, but there is a little more to t
he definition.

According to a article by Joe Rao of Discovery News on August 20,2013 which read in part, 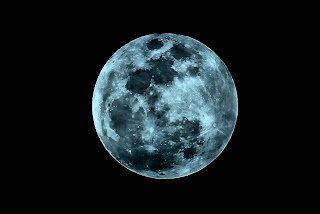 "Back in the July 1943 issue of "Sky & Telescope magazine, in a question and answer column written by Lawrence J. Lafleur, there was a reference made to the term "Blue Moon." Lafleur cited the unusual term from a copy of the 1937 edition of the now-defunct Maine Farmers’ Almanac (NOT to be confused with The Farmers' Almanac which is still published in Lewiston, Maine)."

"On the Maine Farmers' almanac page for August 1937, the calendar definition of the Blue Moon explained that occasionally "one of the four seasons would contain four full moons instead of the usual three."
"There are seven Blue Moons in a Lunar Cycle of nineteen years," continued the Almanac, ending on the comment: "In olden times the almanac makers had much difficulty calculating the occurrence of the Blue Moon and this uncertainty gave rise to the expression 'Once in a Blue Moon.'"
Even though this is the first full moon of August it is the fourth of the summer season.  No wonder this has been such a crazy summer, four full moons instead of three.  Key West is crazy enough with out the extra full moon tonight.   Nothing earth shaking, but an interesting story of what these blue moons are all about.  ;o)


Posted by Bahama Bob's Rumstyles at 8:20 AM No comments: