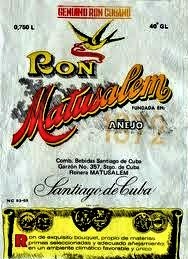 Known as the "Cognac of Rums", Ron Matusalem Gran Reserva is still to this day one of the finest rums in the world.   How did this happen?   It stated in 1872 when Benjamin and Eduardo Camp joined up with Evaristo Alvarez to establish the Matusalem Rum Distillery in Santiago de Cuba.    The brothers Camp brought the knowledge of the Spanish solera system of blending and distillation they acquired from making brandy in Spain.    The name was derived from an Old Testament patriarch who was said to have lived 969 years.     An old Spanish proverb,"Mas viejo que Matusalem", which translates to "Older than Methuselah" is the source of the name and chosen in reference to the aging process used in creating the rum.

Benjamin Camp returned to Spain in 1912 leaving the company operation to his brother Eduardo and Evaristo Alvarez.   The Alvarez and the Camp became closer following the marrage of Evaristo Alvarez's daughter to Eduardo Camp's son.    The company grew  under the leadership of  Claudio Alvarez LeFebre for the next 25 years.   Prohibition in the United States did a lot for the growth of Cuba's rum industry as Americans flocked to Cuba to enjoy their rum.     In the 1940's Claudio's son Claudio Alvarez Soriano took control of the company and under his leadership Matusalem had 50% of Cubas rum business.     In 1956 the Alvarez family was struck by disaster when the elder Alvarez passed away followed 6 months later by his son dieing of lung cancer.

Following the Cuban Revolution, the Matusalem Brand and the family went into exile and the company was moved to the United States and the Matusalem factory in Santiago de Cuba was prducing "Ron Santiago".      The brand was left neglected until Dr. Claudio Alvarez Salazar, the great grand son of the founder took control of the company ending years of fueding  between the three branches of the family.

In 2002 the company relaunched in the Dominican Republic and started producing premium rums from the Caribbean.   Today  the Matusalem Rums are being blended by master blenders that are all direct decedents of the founders of the company.  The rum is still being ared and blended in the solera system in  barrels just like it was produced back in the early days in Cuba.

The Cuban government tried to produce Matusalem again, but after a legal battle it disappeared and has not been seen since.      After many years of rums being produced in Puerto Rico, The Bahamas, and in Florida, the Matuslem Brand has a perminant home from where to produce it's premium rums once again.   ;o)
Posted by Bahama Bob's Rumstyles at 9:27 AM No comments: