The Mai Tai: The Mystery Cocktail of the Tiki Era 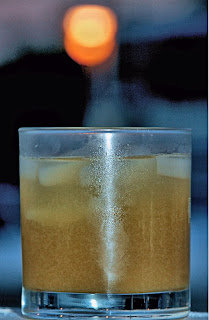 The Mai Tai is one of the cocktails that dominated the Tiki Era of the 40's through the 80's.     The real question is the origin of the cocktail.    Some say it was the creation of "Don the Beachcomber" Beach and others claim it was "Trader Vic" Bergeron.    Both sides have their stories, all of which are very interesting.   The real good news is we still have this fabulous little cocktail around today, although there are as many versions of the cocktail as there are stories of it's origin.

To make your own decision as to who really created the Mai Tai, you have to hear both sides of the story.     Don the Beachcomber opened his first restaurant in Hollywood, California in 1933.   He decorated the place with treasures he had collected during his travels of the South Pacific.     Don's version of the Mai Tai first appeared with the opening of his Waikiki restaurant in 1947.   His version was a mixture of Cuban Rum, Cointreau, Pernod, Angostura Bitters, Fresh Lie Juice, and Grapefruit Juice.

Trader Vic opened a restaurant in the early 1930's called Hinky Dinks, It sported an Eskimo theme.  The story is that Victor Bergeron had been to Hollywood in 1934 and seen Don the Beachcombers Restaurant.    It has been said that he went home and changed Hinky Dinks to the Trade Vic theme.     He claims that he invented the Mai Tai at the service bar at  the Oakland Trade Vic's.   He and the bartender talked about creating a new drink using nothing but the finest ingredients and the Mai Tai was the result.    There are several other stories about how some Tahitian friends were visiting and after tasting the cocktail, afterwards Carrie Guild expressed the words "Maita'i roa ae", Literally meaning very good.     "Maita'i" is a Tahitian word that means good.

Like I say the mystery will be argued for many years to come, but the real story is that just as mysterious as the origin is the real recipe for the Mai Tai.    Based upon the classic Daiquiri, with the addition of orange and almond flavors fit perfectly into the Tiki cocktails that were sweeping the country in the 40's.

Trader Vic's Original Mai Tai - 1944
Shake vigorously and serve in a rocks glass with a sprig of mint.

Don the Beach Comber's Mai Tai
Shake all ingredients in a shaker fill with ice, strain into a tall highball glass filled with crushed ice.  Garnish with fruits and serve with a straw.

Bahama Bob's Mai Tai
Place all ingredients in a shaker with ice and Strain into a Highball glass filled with crushed ice and garnish with a lime and orange wheel.

There are as many versions of the Mai Tai as there are people that make this cocktail.    I have one of my own, that is some where between the two, but this makes my point even clearer that both of these men invented very fine cocktails that I think got to share the same name.    I almost think that they named it the same to create more controversy between them and controversy keeps the names in the forefront and people walking through the front door of both of their restaurants.    You make your own decision.   ;o)

Posted by Bahama Bob's Rumstyles at 9:03 AM No comments: