Supermodel Chrissy Teigan is starring as a peg-legged buccaneer in a new advertisement for Captain Morgan’s flavored rum range. 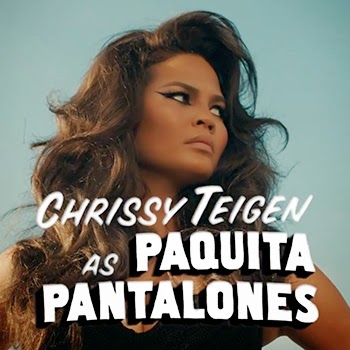 
The advertisement, which can been viewed in full below, promotes Captain Morgan’s new flavored range consisting of Pineapple, Coconut and Grapefruit variants.   In the ad, entitled “I know what you drank last summer”, Teigan slices pineapples with a sword and smashes grapefruits to create cocktails for beach holiday-makers.
On her Instagram account, Teigan said: “Watch my new @CaptainMorganUSA video! My co-stars are the most delicious cocktails of all time, and I dyed my hair black and cut my leg off because I commit to my craft.”
Brand-owner Diageo launched the collection in the US in February this year, announcing its intention to roll out a summer-themed marketing campaign throughout the year.   Diageo launched its first Captain Morgan White Rum in the US in February 2014. Click on the link below to see Teigan in action as Paquita Pantalones.
Posted by Bahama Bob's Rumstyles at 7:00 AM No comments: