No Imagination at Home, but Willing to Try new Things at the Pub 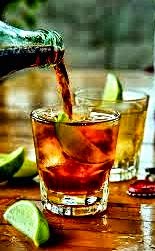 Have you noticed that when you visit friends and or you are at home you pretty much drink the
same things?  It is an interesting thing, friends and myself included, except with me it is just the opposite.  I drink the same thing when I'm out on the town, and experiment at home.

I notice that people that come to the Rum Bar are willing to experiment with new ideas regularly.  I find only a few that are really stuck in their ways and don't want to vary from their regular cocktail.   There is an article done about some research recently done in the United Kingdom that verifies this phenomena.   An article in the Spirits Business showed the results.


"Eight out of 10 United Kingdom consumers never or rarely try new alcoholic beverages when drinking outside of their homes, new research has revealed."


Research shows the majority of British consumers are reluctant to try new alcoholic drinks.  Researchers found 77% of out-of-home drinkers were reluctant to try new products and 32% admitted to sticking to brands they already know and trust.  Reasons given for being hesitant to sample new brands included a lack of awareness of new products on the market (14%) and that there were no new drinks on the market that they liked (21%).
“With the vast diversity of products available at pubs, bars and clubs, consumers are faced with a myriad of alcoholic beverage options, and in the face of so many new drinks they often stick to tried and tested favorites,” commented Sam Allen, analyst.
However, more than half of those questioned (56%) who frequently experimented with new drinks said they enjoyed trying new flavors and 33% looked for locally made products.  Seasonal products also proved favorable, with a quarter of consumers keen to try new offerings selecting seasonal beverages.  “Many consumers are becoming bored with traditional flavors, which has resulted in the rapid growth of smaller scale brewing and craft production,” Allen added.  “Limited edition and seasonal options that offer fresh and exciting tastes will encourage more consumers to try products while they have the chance.”
Read More at  http://www.thespiritsbusiness.com/2015/01/most-consumers-never-try-new-alcoholic-drinks/?article-source=newsletter&source=346&date=2015-01-23
Posted by Bahama Bob's Rumstyles at 7:00 AM No comments: