Diplomatico has introduced to America it's latest masterpiece by Master Blender Tito Cordero.   Ambassador is Tito's "newest "baby".    This new rum, hardly new it has been many years in the making and is a part of the environment from which it is made.    At the base of the Andes mountains adjacent to the Terepaine National Park in Venezuela is where it all happens for Ambassador.   The nearly stable temperatures and high humidity of the region is ideal for the production of the fine quality sugar cane that is selected specifically for the production of Ambassador Rum.  The "Honey of Cane", the propitiatory yeast, and the purest of waters that come down from the Terepaine National Park all are a part of this new rum that the entire Diplomatico organization is so proud of.

"The Ambassador" is  first passed through a continuous column still to clean the wash, then to the copper pot still, which will bring the wash to 80% and remove the impurities.   The distillate is reduced to 50% and aged in Oak barrels and then it is rested in Pedro Ximenez Sherry Barrels at 48% and then bottled at 47%  ABV or 94 Proof.      The combination of old rums with heavy alcohol and light rums are used in the blend form the basis of this rums wonderful flavor. 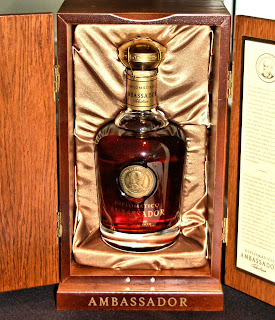 This very special rum has an alluring pungent nose made up of fruit, vanilla, sugar cane and a bit of smokiness hidden behind the scenes.    Many of the characteristics of the aroma remain as the rum passes over the palate, but yield to the flavors of dark chocolate, dried fruits, coffee.   The finish is a wonderful long lasting and powerful one that just won't stop.

These flavors have been balanced beautifully by the 10 or so years of aging in Oak barrels that have had American Bourbon, Scotch Malt and Grain Whiskey in them prior to the Ambassador Rum and then recasked into the Pedro Ximenez Sherry Barrels for another two years  before bottling.

Ambassador Rum is going to be introduced to the United States very soon in Florida, New York/New Jersey, and Texas in the very near future.   This is not going to be an inexpensive rum, but one that you will thoroughly enjoy once you gain the possession of it.     ;o)

Posted by Bahama Bob's Rumstyles at 12:43 PM No comments: