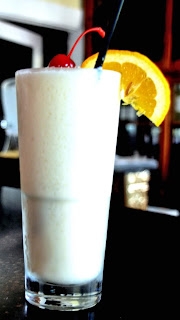 Monchito Marrero is no longer with us, but he is still a celebrity in his own right and his legacy lives on in the form of his flavorful handiwork. Internationally, it is estimated that more than 200 million Piña Coladas have been served since 1954 when Monchito officially mixed the first one in what was then the Caribe Hilton's Beachcombers Bar.

You can enjoy the same drink Monchito created and personally served to Caribe Hilton guests, including such luminaries such as Gloria Swanson, Elizabeth Taylor, and John Wayne. The original Piña Colada recipe is: 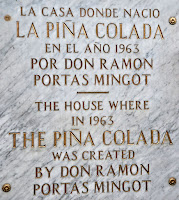 Recently, we shared what we believed to be the original pina colada recipe, a 1963 concoction hailing from the famous Barrachina watering hole in Old San Juan.  But in the weeks that followed that post, a new contender arose proclaiming that they, in fact, were behind the creation of the world's most popular tropical drink.

It really doesn't matter today who actually first created it some 64 years later, but just how good it really is and tomorrow is the day we celebrate this wonderful cocktail.

Posted by Bahama Bob's Rumstyles at 5:42 AM No comments: