Through out the seventies and the eighties when the bars closed down in Key West, the late night workers crossed the Cow Key Channel Bridge and about 3 in the morning they started the party at the "Boca Chica Lounge".   This was a no hold barred heavy drinkin', partyin' and fightin' bar much like the ones that were brought to light in the movie Road House.  Complete with the chain link fence protecting the bar.  Here are some of the memories from friends that lived here during the bars hay days.

For the 35-year-old Rick Berard whose family has owned the Boca Chica for more than 25 years, in the early morning hours was a haven for people who work in other clubs.  When Key West bars close at 4 a.m., the Boca Chica Lounge would fill up with bartenders, waiters and waitresses, motel desk clerks and cab drivers. The drinks are cheap. The disc jockey rocks out from midnight to 7 a.m. and the chain-link fence on the wall and the bunk bed on the dance floor sparkle in the flashing lights.
Former Sheriff  Rick Ramsay was the lone road deputy for the Lower Keys that night, Phelps said, and was dispatched to subdue a "300-pound man" who had busted up the place fighting.  Once there, Ramsay purportedly tricked the man into handcuffing himself, according to Phelps' tale.  "We used to say that you never worked a shift on the road until you rolled in the mud and the blood at the Boca Chica Lounge," former Sheriff Bob Peryam said. "We were always the least-armed people when we went there."   The bar in its heyday, the 1980's when drug smuggling peaked in the Keys was frequented by shrimpers, smugglers, thieves and drug dealers, according to Peryam. Its nickname was the "knife and gun club, It was the roughest bar I've ever seen, let alone been in, It was one of our busiest places. It is iconic, but not in a good way."
My friend Jill remembers the place well, "Oh ya! The first time I walked in I took all my gold off.   The bar was behind a chain link fence and some one thru a bottle at it.    Wicked smokey.   “Was called the knife and gun club, if you didn't have one, rumor had it, just ask at the door”.  It was crazy and opened 24 hrs."

“While no records were found specifying when the Boca Chica Lounge went out of business, anecdotal accounts put its demise about the time the new law was in effect, said DeFoor, who added that the lounge's owner bitterly fought it.”
When Key West bars closed at 4 a.m., the Boca Chica Lounge began to fill up.  The drinks were cheap and the disc jockey rocks out from midnight to 7 a.m, a chain-link fence on the wall and a bunk bed on the dance floor sparkle in the flashing lights.   Like so many other legendary watering holes in the keys, the Boca Chica Lounge was one of the most notorious anywhere.   This place was truly a place for the people of the night, and perfect for those who made a living in Key West's service industry, giving them a place to go after work.  Just a few hundred yards from the past the Cow Key Channel Bridge, the old place still stands and is for sale today, complete with the distinctive sign still standing. 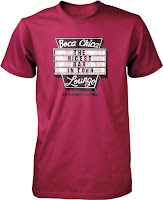 You can still by the way find a t-shirts with the old sign on the chest at https://longlosttees.com/shop/boca-chica-lounge/

Posted by Bahama Bob's Rumstyles at 5:56 AM No comments: