The Distilling Process and How it Effects the Final Product

Ethanol is the “good” type of alcohol that we consume, hopefully with party hats on! Congeners are a mix of other alcohols, acids, fats, and so on. Congeners are what give a spirit its unique taste. Some congeners are pleasant tasting while others are nasty. Controlling which congeners end up in your bottle is a big part of the distiller’s skills. 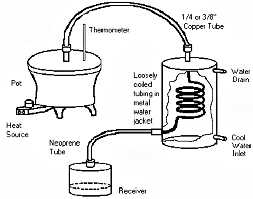 Distillation is what turns a mash of fermentation into something you might want to drink.  Distillation might sound complicated and wizard-like, but it certainly can be.  The basics of the concepts are very easy.  Simply put, distillation is a way of concentrating the good parts of the fermented mash, and leaving behind the less desirable elements.  Using heat to break apart the various elements of the mash, a distiller can select just the desirable components. Of course, sloppy distillation can leave lots of the bad stuff, which makes hangover’s particularly nasty. That’s one reason why higher end spirits are less likely to cause you a hangover after you consumed the same amount of the cheaper spirit.

If you were to take a pot
of water from a mud puddle and place it in a still on the hot stove with a thermometer in it, heat the water temperature to around 212 degrees F.  As it approaches 212 F, the steam would start coming off the muddy water.   This is the water changing state from liquid to gas.   Now let’s keep the water boiling for a good long time and watch the thermometer. No matter how high you turn up the heat, the water won’t get hotter than 212 F. Sure, turning up the heat makes the water turn into steam faster, but the liquid will stay at 212. This is the fact that allows you to separate the water from the “muck”.  The steam leaves the “pot” and travels to the condenser, what is left is pure water.  This is the basis, but there are a few other items involved.

Everything that is condensed that comes off the still before it reaches 212 degrees are the “heads” of the distillation and need to be discarded.  When the water temperature levels at 212 degrees the output is pure water or the “hearts” of the distillation.  The collection of the distillate continues until the temperature in the pot starts rising again.  This means that the water is gone and the other materials are turning to vapor.  What is collected at this point, what comes out from there on is called the “tails”.

Chill the outside of this vapor tube cooling the vapor faster, perhaps bathing the tubing in some cool water for example.  This is the essence of fractional distillation!  How do you know which liquid is coming out of the tubing? That’s easy! Look at the thermometer. Knowing the temperature of the liquid you can infer what’s boiling, and hence what’s coming out of the tube in cooled form. If all you want is ethanol, only collect the liquid that’s coming out when the thermometer reads 173 F.

Of course, distillation is never quite so cut and dried. While the ethanol is boiling off, the occasional congener molecule (the flavor, you’ll recall) or water gets carried along in the rising ethanol vapor. As a result, the cooled liquid you collect has more ethanol than you started with, but also some amount of water and congeners.  You can redistill the resulting mix to further purify it. When a vodka advertises exactly how many times it’s distilled, this is exactly what they’re doing, removing impurities and congeners with each distillation run. On the other hand, congeners also contain the components that give each type of spirit its distinct taste.   The congeners in tequila taste different than the congeners in rum.  Using heat-based distillation, you can’t get above 95% purity of ethanol, no matter how many times you distill. It turns out that water molecules bond to ethanol molecules and more elaborate methods are needed to strip the water out if you needed a higher alcohol percentage. This is not coincidentally why Vodka by definition is 95% alcohol, as it comes off of the still, also known as a “neutral spirit”.

The beauty of distillation is that it can be performed multiple times, each time further concentrating the desired elements and leaving out the undesirable. Much of the differences between brands of spirits come down to How many times the liquid was distilled, what type of still was used and where in the boiling process the distiller started and stopped collecting the finished product.

Some spirits have legal requirements about the minimum or maximum alcohol content they must be distilled to. Note that this is not the same as the final alcohol percentage in in the bottle. Many spirits are distilled to much higher alcohol percentages, aged in barrels, and then water is added to bring the final bottled result down to more palatable alcohol levels, typically between 40% and 50%.   Bourbon cannot legally be distilled to more than 80% alcohol, but before it’s put into barrels, it must be no more than 62.5% alcohol.  Compare that to vodka which is typically distilled to 95% alcohol.  It’s easy to see that bourbon has many more congeners in it so has far more taste than vodka ever will.

A huge part of the spirit-making craft is controlling the distillation process. Knowing when to start and stop collecting is just one part of the story. Every batch of starting mash is different and the distiller’s craft is to know how to adjust things to create an optimal distillate to get the final results they are looking for.
Posted by Bahama Bob's Rumstyles at 5:29 AM No comments: