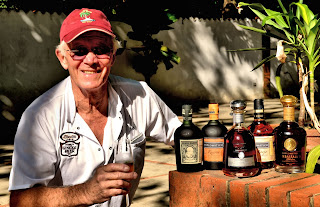 I ran across this great little article in "The Huffington Post" and thought you might enjoy reading all about it.

Many older people report being unable to bounce back from a night of drinking as quickly as they did when they were younger.


But, contrary to popular belief, older people actually are less likely than younger people to complain of a hangover following a night of drinking, according to a new study from Denmark.


Researchers looked at the drinking habits of 52,000 people aged between 18 and 94, which included how often they experienced a hangover after binge drinking -- defined as consuming more than 5 alcoholic drinks in one sitting. They found that people are not as prone to hangovers after binge drinking as they age.


Janne S. Tolstrup, a research program director at the University of Southern Denmark, noted that this is the only really large population-based study that has included information on hangovers.


Hangovers are characterized by headaches, exhaustion and queasiness. And the cause is primarily dehydration.


"We found that the tendency to have hangovers decreased by increasing age," Tolstrup said in a press release. "The first explanation that pops up is that this finding would be due to differences in drinking pattern in different age groups.


"However, trying to account for such differences as much as we could, did not even out the differences in hangover tendency," she said. "In other words, while it is true that older individuals on average binge-drink less often than younger individuals, we did not find in our data that results were due to differences in drinking patterns."


You can read more at http://www.huffingtonpost.com/2013/09/13/hangovers-and-age_n_3920531.html
I found this to be true about myself , I have not really had a hangover for several years.  I have always attributed it to the fact that I am drinking a higher quality spirit these days, but I can accept age has something to do with it as well.  ;o)
Posted by Bahama Bob's Rumstyles at 8:28 AM No comments: