Key West survived the 20th annual Battle of the Bars 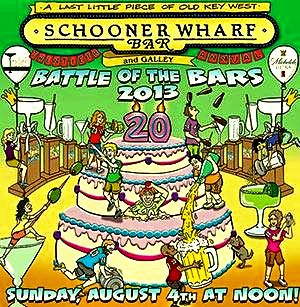 The 20th annual event drew many of the teams from all of the best bars in Key West.   They had to chug margaritas, run obstacle courses and many other events in and around the Schooner Wharf complex.   This is a fun drunken Key West event that happens each year allowing the local bartenders and servers to get involved in a really fun event to really to get involved in.

The battle promises to be a lot of fun for all that attend and participate in frivolity. 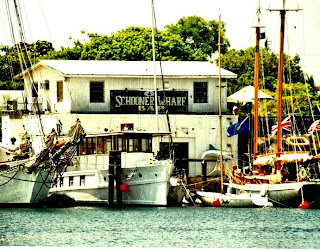 This is a day of beer, bartenders, margaritas and mayhem that is designed to help improve the lives of Key West people that are supported by Several of the local charities here in Key West.   This years event will benefit the Florida Keys SPCA.


Teams of seven race against the clock and each other on a hilarious obstacle course on the street behind the Schooner Wharf Bar.   For the race the team must mix perfect margarita, serve it without spilling any, tap a keg, and sort recyclables.  Then when this is completed they must chug a beer.

Annually they raise some $20,000 for the local charities.   This is a really fun and productive event for the community.

The 20th Annual Battle of the Bars at Schooner Wharf Bar will take place Sunday, August 4th at noon. Teams of seven, from local bars and restaurants, will race against the clock and each other in a hilarious obstacle course that fills the street in front of Schooner Wharf Bar. Trophies and bragging rights will be awarded for the Most Outrageous Team Costume and Deepest Pockets.   Unfortunately it was a work day for me and I didn't get the opportunity to participate.  ;o)

Posted by Bahama Bob's Rumstyles at 8:49 AM No comments: