Second day in Old San Juan, it’s off to the trolley and a tour of Old San Juan.      Today we are following the wall as we travel around the city.    Known as the walled city, Old San Juan is a historically significant place that was held and attacked by many countries since its beginnings in the Sixteenth Century.     The fortress is immense and is strategically located at the entrance to San Juan Harbor with Fort San Juan de la Cruz across the harbor from it placing any enemy vessel in a deadly cross fire as it tries to enter the bay. 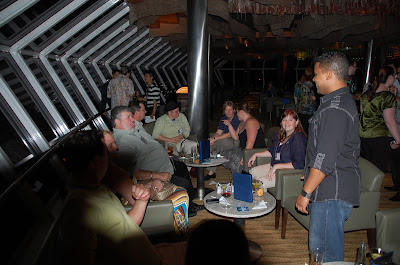 Once aboard the Celebrity Summit, we got checked in, had the safety drill, move into our room, then it was time for some lunch in the Waterfall café for some lunch and then off to the Setting Sail Party by the pool on the 10th deck.     The crew made sure that we were well stocked with rum drinks as the ship slowly backed out of its berth and was turned around and got under way.     I can feel the ships movement now as we are at sea and I am in the room typing about today’s events.

Tomorrow is a day at sea so we will be wandering around the ship and seeing what the ship has to offer us as we embark on our sea day. ;o).

Posted by Bahama Bob's Rumstyles at 8:25 AM No comments: