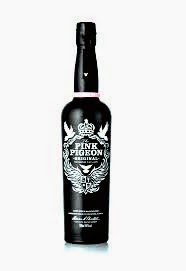 The wonderful floral flavors of vanilla will be coming to you in a new bottle in the very near
future.  Pink pigeon is launching their new bottle as part of Cocktail Week in London October 6 - 12.

“Pink Pigeon has dropped its iconic black bottle in favor of a transparent design.”   “While the London-based drinks retailer and brand owner, Berry Bros. and Rudd described the former matte black Pink Pigeon bottle as “elegant and luxurious”, the group has opted for a new clear design to make the amber hue of the rum more noticeable.”
Luke Tegner, Brands Marketing Director, Berry Bros. & Rudd Spirits, states: “In order to lead the discussion with the trade and consumers on the ever-growing world of spiced rum, we will be conducting Spiced Rum master classes during London Cocktail Week providing insight on the three botanicals which give Pink Pigeon its distinct flavor profile. This gives a perfect opportunity to unveil our clear glass bottle with showcases the rum so well”.
I'm looking forward to the arrival of the new bottle to make the appearance of the rum visible to the customer and let their eyes draw them in to the beautiful amber mahogany color of the rum as it sits on the shelf.  Eye appeal of the color of the rum is a very important part of the rum's overall appeal.  ;)
Posted by Bahama Bob's Rumstyles at 7:00 AM No comments: