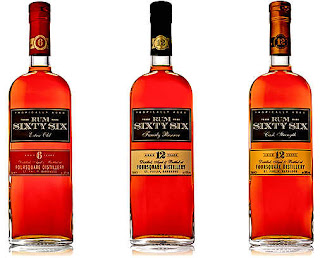 Halewood acquired a stake in the Rum Sixty-Six parent company, Bajan Trading Company, through this new joint venture.   H.J. Neill Ltd. firm also got the import and distribution rights of Barbados-made Rum Sixty-Six.  Bajan Trading Company has a family connection to the Seale family, with Richard Seale currently acting as master distiller of Rum Sixty-Six. The liquid, which is distilled in small batches, is aged and bottled at RL Seale’s historic Foursquare Rum Distillery in St Philip, Barbados. The process uses a blend of continuous still and copper pot productions.   Rum Sixty-Six is recommended for drinking straight like a fine scotch or cognac for sipping and savoring or as a base for cocktails.

“Consumers are placing increasing emphasis on provenance and authenticity of their rum choices.  Rum Sixty-Six’s legacy is one skilled and honest rum making that comes from the historic Foursquare Distillery.  This provides a genuine strength of character to the rum, whether you’re new to the category or looking for the ultimate cask strength rum.”

The Extra Old variant is a six year-old variant bottled at 40% ABV.  This expression is targeting the “new rum explorers”.  The Cask Strength expression is bottled at 59% ABV, is looking to attract the more sophisticated palate of the rum connoisseurs.   The two new additions also introduce Rum Sixty Six’s new bottle design, that is available in a 700 ml format.   Extra Old has a recommended price of £30 while Cask Strength is £55.

These wonderful Rums unfortunately are only going to be available in Great Britain, but if you happen to be going there, don’t miss out on any of these classic Richard Seale rums.
Posted by Bahama Bob's Rumstyles at 5:39 AM No comments: