﻿
At the grave of the Constantino Ribalaigua, the barman who served drinks for writer Ernest Hemingway was the setting Friday for an unprecedented toast with daiquiri prepared by United States and Cuban bartenders at Havana’s Colón Cemetery.   A dozen bartenders from both countries — which this week re-established diplomatic ties after half a century of enmity — gathered under a scorching tropical sun at the cemetery to honor Catalán barman Constantino Ribalaigua, known as Constante, who died in 1953.
Four years ago Julio Cabreras with a group of American and Cuban bartenders along with a few rum enthusiasts also made the journey to Constantino Ribalaigua’s mausoleum to make an El Floridita Daiquiri and toast "Constante".   This too was a very moving experience that I’ll never forget.
This years tribute began with a minute of silence in front of the mausoleum of Constante, who for 35 years owned the Floridita Bar in Old Havana, where this cocktail, created in Cuba, made of rum, lime juice, sugar and ice in the late 19th century, became famous.   “This is an incredible event, it’s very important for any barman from anywhere in the world to be able to be here with the person who immortalized the daiquiri and turned it into one of the most famous cocktails around the world,” U.S. bartender Christian Delpech told AFP.        Several bartenders prepared daiquiri rounds and toasted, in a tribute during which participants highlighted the fact that reconciliation between Washington and Havana will allow Americans to enjoy Cuban rum-based drinks, just as they did during the 1920-1933 Prohibition Era in the United States. 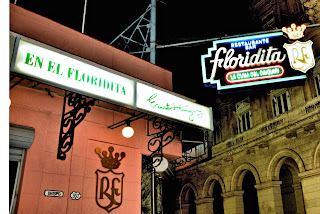 The homage to Constante's mausoleum marked the start of activities to celebrate the bicentennial of La Floridita, one of the bars preferred by Hemingway (1898-1961), who lived in Cuba for 21 years.   “I’m very happy, moved and honored to be here celebrating not only La Floridita’s 200th anniversary but to be at the grave of the most famous barman in Cuba’s history,” said U.S. bartender Ricky Gómez, of New Orleans, the son of Cuban parents. 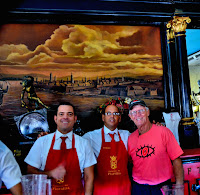 My visit to La Floridita just over a week ago was a very joyous one, allowing me to spend some time with a friend that I made on my first visit in 2012.   Alex mad me several fine Floridita Daiquiris and we enjoyed the time that went by far to fast.  If you get the opportunity, do stop by La Floridita during the 200th and enjoy one of the finest daiquiris that you will ever taste.