Where do Americans Spend Their Booze Money? 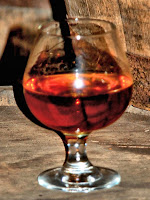 It seems that American consumers are spending about 1 % of the money they are spending on booze.   This is an amount that hasn't changed very much in the past 30 or so years.   What is interesting about the report is where the money is being spent.

In a report by Lam Thuy Vo, http://www.npr.org/blogs/money/2012/06/19/155366716/what-america-spends-on-booze, it shows that in 1982, 24% of the money spent on alcohol was being spent at bars and restaurants, and 76% being bought at stores for home use.     By the 2011 report is shows that we are spending 40% of the booze money in bars and 60% in the stores.   This is a major shift, but what does it really mean.   Based on the Bureau of Labor Statistics report, the cost of booze in Bars and Restaurants has risen 79% since 1982 and the cost of booze in the stores has dropped 39%.   It would appear that we are not really going out more, it has just gotten more expensive to drink in the bars and restaurants that is shifting the percentages..

The report also showed that of the alcohol money being spent for home consumption, wine purchases have more that doubled and hard liquor has been cut by more than half.   Beer is also on the decline, though not nearly as significantly.   These are interesting trends, but what really seems significant to me is that Americans haven't really changed their spending for alcohol all that much, they have only shifted where they are spending it.   Buying wine for home instead of hard liquor is a significant savings that allows them to go out and enjoy cocktails at the bars and restaurants though it has become more expensive to do so, in addition to the fact that the beer purchases for home changing only a minor amount, would tend to make me think this is the case.   ;o)
Posted by Bahama Bob's Rumstyles at 8:20 AM No comments: