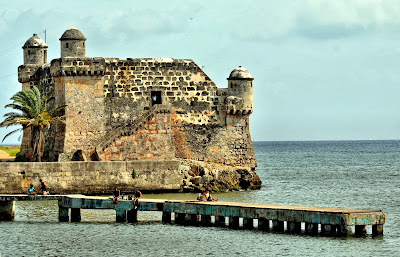 Papa Hemingway would spend much of his life in pursuit of game fish all over the Caribbean and Atlantic Oceans.   He has been pictured in Joe Russell's boat "Anita", and many others. but the majority of his fishing time was aboard his prized fishing yacht "Pilar".     Though purchased while living in Key West, most of her productive days were spent in Cuba.     Cojimar, the little fishing village just to the east of Havana was her home for many many years.

There is a painting in the La Terraza de Cojimar Restaurante and Bar that shows her sitting just off of the dock and the Spanish built fort used to protect the eastern side of the bay from attacks by pirates and war ships. 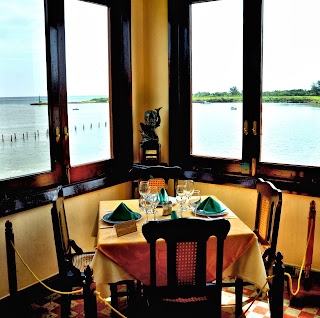 After their fishing expeditions Hemingway and Captain Fuentes could be found at the La Terraza de Cojimar  enjoying some great food, drink and sharing their stories with the rest of the local crowd of fishermen and friends.

Today Pilar stands fully restored at Hemingway's home in San Francisco de Paula, Cuba.  Hemingway and his Captain Fuentes seats are preserved at the restaurant and bar they so regularly would hang out.

Old Man and the Sea became a Nobel Prize winner and the town still remains a sleepy little fishing village with a very colorful past.   It still has the warmth and friendly people that drew Hemingway to it in the 1940's.   ;o)


Posted by Bahama Bob's Rumstyles at 7:27 AM No comments: