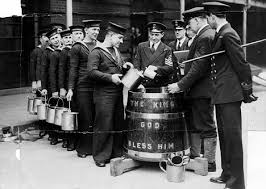 Yesterday marked the 44th Anniversary of Black Tot Day, the day the British Admiralty removed the rum from the naval ships of the Royal Navy.

For hundreds of years, Royal Navy seamen queued up in galleys from the poles to the tropics to receive their regulation lunchtime tot of rum. But 40 years ago, the tradition was ended.
On 31 July 1970, known in the navy as Black Tot Day, the sun passed over the yardarm for the final time and free rum was retired from navy life. 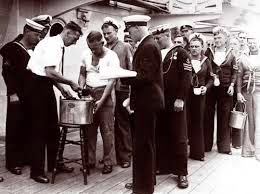 Black arm-bands were worn as the Queen was toasted. Tots were buried at sea and in one navy training camp, sailors paraded a black coffin flanked by drummers and a piper.

"It was a sea change. It was one hell of a change," says Commander David Allsop, who enjoyed the tot as a junior rating after joining the navy in 1955.

The saying "What you doing to do with a drunken sailor" came to an end.  They claimed that it was a tradition that had it's purpose 300 years ago, but with the technology of the modern navel vessels, there was no room for drinking on the job.

Here we just raise our glasses of Pusser's Naval Rum and think of the glamorous day of old when
the British Navy ruled the seas.

"Pusser is Royal Navy slang for a purser, a ship's supply officer, now called a Logistics Officer, in the Royal Navy; thus the word became naval slang for "one hundred per cent Service", as in "pusser's issue", meaning anything that is supplied by the Royal Navy, such as a "pusser's grip", the name given to a canvas bag that sailors may use instead of a suitcase (it folds flat and is thus easy to stow on board ship). Pusser's Rum is sometimes known as Nelson's Blood, in honor of Horatio Nelson, one of the greatest Royal Navy commanders in history."
Posted by Bahama Bob's Rumstyles at 7:00 AM No comments: