This is tough trying to keep up with the blog will I'm working from dawn til night time on the house.  I am trying though. 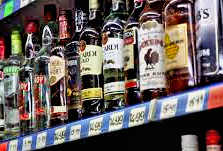 The liquor wall is closer to coming down in Florida, The senate narrowly passed a proposal

nicknamed the 'Whiskey and Wheaties Bill' (SB 106) allowing grocery stores, big box retailers and other stores to sell liquor in the same space as other products was approved by the Florida Senate in a 21-17 vote on Thursday.  Currently, liquor must be sold in a side store which is separated by a wall.

Sen. Anitere Flores, the Miami Republican who was the bill's sponsor, said it eliminates an antiquated provision that's been around since Prohibition.  "We still believe this law from December of 1934 is appropriate in a time when I can pull out my smart phone and order alcohol and have it delivered it to me? You're talking about a wall between two forms of the same product," added Sen. Bill Galvano, a Bradenton Republican.

Sen. Daphne Campbell said she voted no because it might make liquor more accessible to teenagers.   "High school kids are going to go on breaks for lunch and be able to buy alcohol. They could die while driving back to school or be arrested for DUI," said Campbell, a Miami Democrat.

According to the Distilled Spirits Council, Florida would become the 28th state to allow the sale of liquor alongside wine and beer. The measure must still be approved by the House, where an identical bill has reached the floor.

I can't believe that Florida is finally moving into the 21st century allowing us buy our spirits in the same store as our groceries.  Yes!!!!!

Read More at https://www.usnews.com/news/best-states/florida/articles/2017-03-23/whiskey-and-wheaties-bill-narrowly-passes-florida-senate
Posted by Bahama Bob's Rumstyles at 5:26 AM No comments: