Are Rums Heading Down the Trail of Vodka?

I'm wondering if the rum world is going to follow suit and head down the path that Vodka has with the insane flavors.     Jim Beam has just purchased the Pinnacle Vodka and Calico Jack brands and they are going to be producing the rum for this brand. 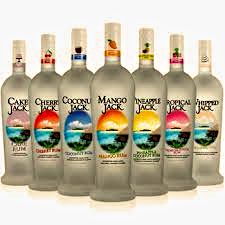 I can't believe that there are going to be a bunch of really dumb rum flavors coming at us now like the have in the vodka world.  I can't wait for the arrival of cookie dough or who knows maybe chewing tobacco flavored rums will appear next.     There is a place in the teenybopper bars for these kinds of rums, but I really have to question the validity of  the market potential in the big picture.

There has been another line of really inexpensive rums that appeared at the  2012 Rum Renaissance Festival called Flip Flop rums that are aimed at the quick grab a bottle to take to the party or lake group.  Maybe these flavored rums might fit the same group as well.

Who knows, I've seen stranger things succeed, so lets look and see what happens to this group of wild ideas.   ;o)