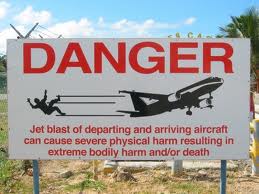 Phillipsburg, St. Maartin ( Dutch Side) where we disembarked from the cruise ship, and started this adventure.     The Dutch side of the island is the more populated side, but the French side is larger in size.    The uneven division of the island according to folklore occurred because the French and the Dutch each chose a person to walk from one end of the island and where the two men met would be the dividing line.    It looks like the Frenchman was a faster walker.    On March 23, 1648 the French and the Dutch struck the Treaty of Concordia, dividing the island permanently.   This island of approximately 75,000 people relies on tourism as it's primary resource for income.    The Dutch through casino's, beaches, jewelery, and exotic drinks from the native Guavaberry Rum based Liquors.     The French side is known for nude beaches, clothes and shopping.   Oh and Princess Juliana International Airport where the planes land just over the head of the sun bathers in the beach.

For us it was wandering through the narrow streets and down the beautiful beach just watching and enjoying the scenery.    A stop at the Guavaberry Rum Emporium and a tasting of the unusual flavored and aged rums was very enjoyable, but the time walking the town and riding the water taxis really was the fun point for us. 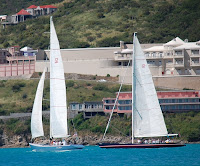 The bay was filled with interesting vessels including some "America's Cup" sail boats that were available for rides.    The water taxi is a great way to get from the cruise ship port to the town of Phillipsburg, but there are also land taxi's for trips to the French side also.

All in all a quaint little island that offers a lot of opportunity for fun and frolic.    It is said that the night life there is pretty lively, but when traveling by cruise ship, you are underway at 6 pm.     ;o) 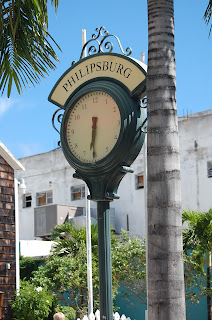 Posted by Bahama Bob's Rumstyles at 8:32 AM No comments: