Grog and Bumbo: Pirates to Politics

In the world of rum history there are two very old mixtures that come to mind.  Grog and Bumbo, these were mixtures that were a big part of the nautical scene for the past three centuries.   Grog is  basically a watered down navy rum that is some cases lime juice was added.   Bumbo is a combination of rum, sugar and water wit a topping of fresh nutmeg, and maybe cinnamon. 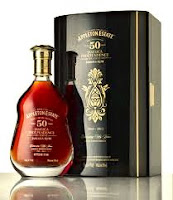 Grog is the drink of choice of many a British Naval sailor, as well as some pirates.    It seems that after the capture of Jamaica, the British Admiralty took the sailors off of beer and brandy and started the tradition of a rum ration instead.   Some
85 years later Admiral Edward Vernon watered down the rum and added lime, creating Grog.   This name came from Vernon's nickname "Old Grog".   Grog is a very tasty thirst quenching blend that is simple to make and always satisfies.

On the other hand, Bumbo adds a sweetener to the grog and some nutmeg for flavor.  This blend of "spiced" grog seems to be the drink of choice of pirates and other swashbucklers of the high seas.   The merchant marine and the pirates didn't suffer from scurvy as did the British Sailors, mainly because their voyages were of a short haul nature.  As a result the citrus could be dropped from the grog and sweetener and spice added making a much tastier blend.

There was a political candidate running for the House of Burgess in 1758 who prepared 160 gallons of "Bumbo" for 391 voters turning the voters into "Bumbo" and swinging their vote his way.  Guess who the candidate was, none other than George Washington.   This ploy was known as "swilling the planters with bumbo".

Bumbo and Grog are not only a fun rum cocktail, but are historically significant as well.  There was another less know mix call the "Traitor" which was made with honey, orange juice, rum , and nutmeg.

Bumbo
Place all ingredients in an ice filled shaker and shake until chilled and strain into a Collins glass with ice. Garnish with a lime wheel.

Try this I think you will enjoy it this summer on the patio or the aft deck of the boat..   ;o)
Posted by Bahama Bob's Rumstyles at 8:42 AM No comments: