Richard Seale on Why Use Sugar Cane?

Richard Seale wrote an interesting piece on his facebook page the other day.  The distilleries on
Barbados seem to be heading back to their roots if you will and making use of several local resources that were available to their forefathers to improve their rums.  Barbados has the distinct honor of being one of the earliest producers of rum and today is still in the forefront of innovation in the industry.

WHY USE SUGAR CANE 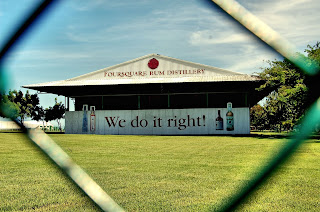 If we look back far enough, we will find less diversity in rum than we have today. It was not wild yeast versus cultured yeast, it was not molasses versus juice, it was not dunder versus non dunder.   There was no "imported molasses" either.

Still Rums had a clear identity, by country. They were built on different formulas of the same prime elements - molasses, cane juice, dunder and water.   Rums were made on sugar cane estates and these elements were what was available.

Economics drove change.   Agricole - rum from pure juice - blossomed in the 19th century from a myriad of economic factors.    City based commercial distilleries arrived molasses only obviously.   Cultured yeast fermentations of 48 hours arrived instead of 2 weeks and of course the column still which changed rum irreversibly forever.

In the small islands of the anglophone Caribbean, free trade has seen the demise of the sugar industry in recent decades and today, the historic great producers are obliged to import molasses.

In 2016 we started making a little rum from syrup and this continued through 2017. Earlier this year we started using fresh cane juice. Both came from St Nicholas Abbey.    We have now started to crush cane ourselves.   As far as we know, our friends at Mount Gay are also using their own estate cane for some of their rum and of course St Nicholas does the same.

We are not doing this to mimic agricole rum. Even if we release pure cane juice rum in the future, we won’t call it agricole. We believe agricole is the sole provenance of our French friends.    We may use dunder as well as we push the envelope in getting flavor from the cane but we are not trying to mimic Jamaican rum.    Definitely no muck pits or dunder pits though !  We are not trying to recreate some specific rum formula from the past.   Again, too much respect for our forefathers to use them as marketing gimmicks.   We are trying to maintain our near 400 year heritage as a sugar cane growing country.   We are trying to reestablish the historic link between Foursquare distillery and the sugar cane estate where it is nestled.   It is not about 'terroir', it is not about juice v molasses, it is about controlling your destiny.

Posted by Bahama Bob's Rumstyles at 5:14 AM No comments: