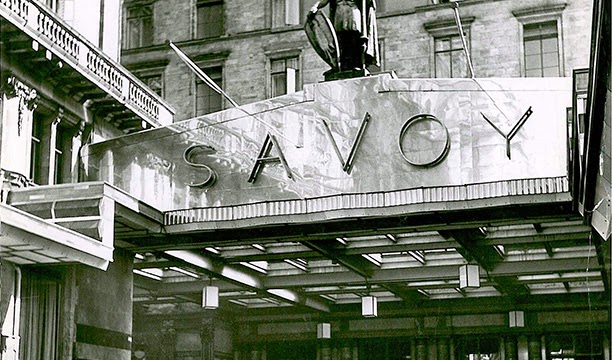 One of the most famous hotels in the world, the Savoy on the Thames in London has been a hangout for man international celebrities since it opening in 1889.


This week, London’s iconic Savoy Hotel celebrated its 125th anniversary. Situated in Westminster City, the luxury hotel was built by impresario Richard D’Oyly Carte and opened to much fanfare in 1889, since it was the first luxury hotel in the city boasting electric lights and lifts, en-suit bathrooms and a constant supply of hot water. In 1890, Carte hired the hotel’s first famous manager, César Ritz, who later became the founder of the Ritz Hotel. Rich and famous visitors from across the globe have long frequented the hotel, drawn by its consistent quality, luxury and style.
While one side of The Savoy faces the Strand, the other looks out across the River Thames, giving guests an idyllic view of the city. This painting by artist Harold Oakley shows the Savoy in 1904, with its ornate original balconies.
The Savoy was the first hotel in the UK to install electricity-generated lifts, a feature only previously seen in opulent American hotels. The hotel was built on a plot of land next to The Savoy Theatre which opened in 1881. The plot was originally purchased by Carte to house an electrical generator for the theatre, making it the world’s first public building to be lit entirely by electricity.
Posted by Bahama Bob's Rumstyles at 7:00 AM No comments: