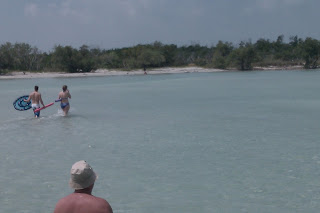 Snipes Point is a beautiful sandbar located about 15 miles from Key West on the gulf side.      This remote beach and sandbar is one of the most beautiful beaches anywhere.     At low tide, there is a sandbar big enough to have a football game, or one very large party, which is usually the case on most Sundays.     Boats anchor off the sandbar and music is playing and footballs and Frisbees are flying, and an occasional rum is consumed. 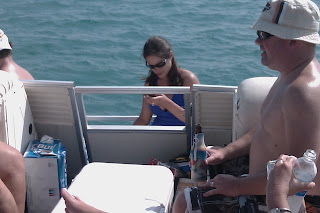 Yesterday I took a few friends from the Charlotte area of North Carolina out on a party barge to Snipes for a little bit of fun in the sun.     We were not disappointed, the weather was great all morning and a better part of the afternoon.      We did have to scramble to get back ahead of a thunderstorm, but were safe back in the harbor before the rain, thunder, lightning, and wind arrived.     All a part of boating in the keys during the spring and summer.     Undaunted by the rain, we got to frolic on the beach, tan on the pontoon deck, and yea all  but me got to have a little "Bahama Bob" rum punch.     By the way they had a few beers and some food also.     Our famous fisherman caught 3 fish while in transit from the harbor to Snipes, and all was good for the day.     The wind shift indicating a front passing was the warning that we needed to start back to the harbor, but it was probably more of a blessing than a bad omen.    Most had been exposed to about as much sun as their bodies could take without being burnt to a crisp. 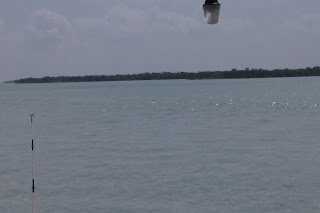 So without further ado, we hauled up the anchor and got underway for home.      With the fishing line in tow, off we went back to the Hurricane Hole Marina and safety from the approaching storm.     Only 1 fish and a sponge were caught on the the return, but a really fun day happened for all.     Calm seas, beautiful sunshine and a few puffy clouds, it just doesn't get any better.     Upon arrival at the docks with the black sky above, we quickly unloaded the boat and moved under cover to continue the party and where I could have a rum cocktail for me as well.     Not cool to be drinking when you have 11 people on your boat.     All rules are overboard once you make the harbor and the boat is secured.     We including yours truly had a great time during the storm and a nice dinner after the storm.     Thanks to some good friends and a reliable boat from Sunset Watersports.     Thanks to all.     ;o)
Posted by Bahama Bob's Rumstyles at 8:46 AM No comments: