The Real McCoy: The Rum and the Man.

William McCoy, born in Syracuse, New York in 1877.   This is the man, son of a brick mason, Civil War Union Navy man and he graduated top of
his class at the Pennsylvania Nautical School on board the USS Saratoga.   Captain Bill McCoy served as quartermaster and mate aboard many vessels among them was the steamer Olivette.  Bill was aboard the Olivette in the Havana Harbor when the USS Maine Exploded in 1898.   Bill and his brother Ben were residents of Holly Hill, Florida, a coastal town just north of Daytona.  There they operated a freight and excursion boat business and built yachts for the likes of the Carnegie's and the Vanderbilt's and others.

During Prohibition the brothers fell on hard times and decided to get into the rumrunning business.  They soon sold their business and moved to Gloucester, Massachusetts.  They bought the Schooner Henry L. Marshall and began smuggling whiskey from Nassau and Bimini in the Bahama's, to the east coast of the United States.  They spent most of their time on "Rum Row" off of Long Island, New York.  After several successful trips Bill bought 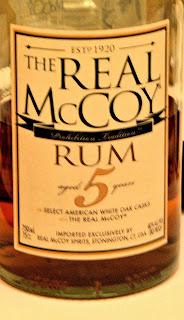 the Schooner Arethusa, and placed it under British Registry to avoid the restrictions of a US Vessel.  Bill renamed her "Tomoka" after a river near Holly Hill.  Bill wound up operating up to 7 vessels.  Bill was also credited with inventing the "Burlock" a burlap package that would hold 6 bottles, and was an economical way to stow and handle the bottles of liquor.    The legend of the McCoy's grew as his high quality liquor and fair pricing perpetuate the phrase "It's the Real McCoy".    The McCoys continued their operation until the capture on the "Tomoka" on November 23, 1923 in International waters.   After serving 9 months in jail, the returned to Florida and invested in real estate, and continued with the boat building business. 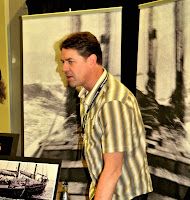 Today we have been introduced to a new rum bearing the same honesty as the name implies.  The Real McCoy Rum is the brain child of Bailey Pryor, the man who was responsible for the documentary on the life and the legend of Captain Bill McCoy.   He wanted a rum that would live up to the legend and the quality that McCoy would  have been proud to sell.    In this vein, he contacted Richard L. Seale in Barbados and the rum was conceived.   This is an authentic rum, properly aged with the flavors, color and quality that is truly "The Real McCoy".

The rum is a pale amber with delicate aromas of fruit, nuts, spices and wood.  The aromas complement the flavors on the palate, and it finishes in a long and subtly toasted nutty flavors.

The rum is available now in Connecticut, but I hope soon it will be here in Florida where we can start enjoying it.   I will keep you informed as to its arrival here at the Rum Bar.   ;o)
Posted by Bahama Bob's Rumstyles at 9:55 AM No comments: