A Planter's Punch If You Please

The Planter's Punch is a cocktail that grew out of the Jamaican Plantations in the 1800's.   This is the original recipe in verse according to an 1878 article in London's "Fun Magazine". 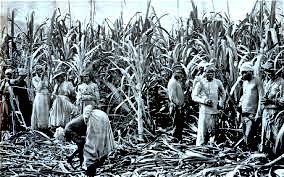 It seems that several of the early versions of Planter's Punch recipes were written in verse.  A Jamaican lady dropped by the Rum Bar in Key West several years ago and recited this recipe to me for a real Jamaican Punch.
Take two of sour (lime)
To one and a half of sweet.
Of Old Jamaica pour three strong (Jamaican Rum),
And add four parts of weak(water).
This is a recipe that was something similar to the original daiquiri from Cuba.   Many of the Caribbean recipes from that era had this style of verse to describe the ingredients and how to put them together.
Here is a pretty good idea that I have put together for a flavorful Planter's Punch.