Where did Hemingway Drink in Havana? Part 1

From the interest in the little tidbit I had for my Sunday Snap-shot, I guess it is time to look a bit more in depth about the Haunts of Hemingway in Havana. 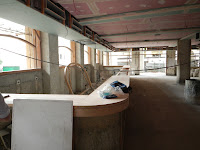 In some of the early visits with Josie Russell,  Hemingway and Russell were known to frequent "Sloppy Joe's" in Havana, a well known bar in the center of Old Havana.    In 1959, following the Cuban Revolution, Sloppy Joe's Bar was closed and the legndary furnishings abandoned.   I was told that the ceiling collapsed in the bar and the building had fallen into disrepair, but there has been a restoration project that has been going on for several years, and the progress has been slow getting things completed.
The Original "Long Bar" is now at the Havana Club Museum in Old Havana, and the new bar is currently being constructed as seen to the right.

Sloppy Joe's was one of the most popular bars in Havana during the 30's, Americans coming to Havana to enjoy liquor, that was not available in the US.   Located at the Corner of Zulueta and Animas Streets, Sloppy Joe's thrived for many years.


One of his usual clients was Ernest Hemingway. He visited Jose Garcia in several occasions with his pal, Joe Russell who was the owner of another Sloppy Joe's Bar in Cayo Hueso, a name Hemingway had suggested in honour to Mr. Garcia. The tourists that visited Havana during that epoch, mostly North Americans, preferred two places: Sloppy Joe's Bar, and the beautiful race horse track of Havana controlled by Meyer Lansky's mafia.


People who visited Havana during those decades of great splendour had to go to three different places when it was about food and enjoyment: "El Floridita" , "Sloppy Joe's Bar", and "La Bodeguita del Medio", otherwise, they wouldn't have visited Havana city.

Sloppy Joe's Bar was in its time a very popular place, not only appreciated for its fine drinks and liquors but also for its connotation of preferential atmosphere, attractive appointments, as well as for having the longest mahogany bar in Cuba, and perhaps of the whole world. This bar had a great splendour in the 30's and 40's, and it was visited frequently by many Hollywood celebrities and international bohemian characters.
You can read more about Sloppy Joe's Havana at http://www.sloppyjoes.org/history.htm .

Posted by Bahama Bob's Rumstyles at 10:39 AM No comments: