Visiting an "Old Friend" from my Youth: "The Zombie"

The past week in Miami not only gave me a chance to enjoy many fine rums, but a trip to the Mai-Kai in Fort Lauderdale gave me a chance to revisit an old right of passage upon turning 21 in the sixty's in California.     Part of my college days were spent in Arcata, California where besides or studies much of my education was learned around the town square at one of the many local bars.    back in those days for your 21st birthday the fraternity brothers would take you down to "Marino's" and they would buy you a Zombie or 6, but you usually could barely crawl away from the experience. 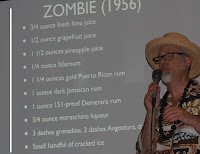 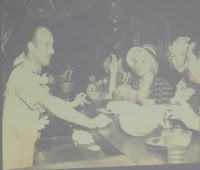 The Zombie Jamboree at the Mai-Kai gave me a chance to revisit the world of Don the Beachcomber and the Polynesian craze of the 50's through the 70's in California.     Donn Beach, as he was know was actually born Earnest Raymond Beaumont Gantt, in Limestone County, Texas.     This former bootlegger of the prohibition era managed to travel the South Pacific and explore many of the islands of the Caribbean on his way to becoming a restaurateur in Hollywood, California.     Know as Don the Beachcomber, his legendary knack to understand how to combine unusual fruits, herbs, and flavors to make some of the most popular and flavorful "Tiki Cocktails" ever created.    This world famous Zombie has appeared and reappeared in different forms since it's inception in the mid 1930's.     This famous cocktail mas been released in many recipes that claim to be the original recipe, but because of his quirky codes for ingredients, the recipe kept being rewritten until 1956 when it is said that the real recipe was finally revealed. 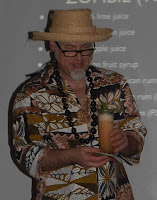 Jeff "Beachbum" Berry, put on a very enlightening seminar at the Mai-Kai revealing the fruits of his 25 or so year study of their life and times of Don the Beachcomber.      His expertise and laid back presentation was not only enjoyable, but very thirst quenching as he served up the different versions of the Zombie from the "Original 1936", to the "Original 1956" recipes.     Jeff and his "Rat Pack Rumposium" are a treat to be around and see seminars.

Having been inspired by the seminar and my youthful experiences with the Zombie, I've decided to pursue in greater depth what really makes the Zombie such a great cocktail even after so many years and create my own    " Bahama Bob Zombie".      This will take some time to work out, but I will let you know about the progress as it progresses.     ;o)
Posted by Bahama Bob's Rumstyles at 9:19 AM No comments: