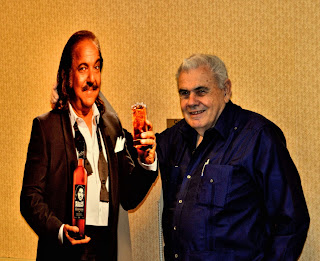 The ever active Don Pancho Fernandez has joined up again with Ron Jeremy to create a new Spiced Rum.    The original collaboration produced a fine seven year old aged rum.  This is not another of the celebrity named spirits that have covered the market in the past few years.  I do have to admit this one is not just a distillate with sugar and vanilla added and a celeb name put on the label.   Bringing in Don Pancho as the Master blender for this rum is a masterful move, what we have here is a fine traditional Cuban style rum.   The original offering was not at all what people expected. it had a nose of dried fruit, spice and a bit of sugarcane to act as a lure to get you to taste this one.  On the palate it wasn't too sweet, but has a full flavor of spice and dried fruit that the nose drew you in with.  The finish is no joke, it is of good length with a clear taste of oak and spice coming through and a hint of the sugarcane reappearing again. 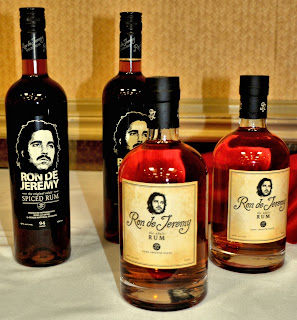 The Spiced Rum is also a serious Don Pancho creation, the rum is three to five years old and is flavored with fresh French Vanilla and other spices macerated and blended into the rum.  This is a serious spiced rum for the Captain and whatever kids that want to move into the adult world of rums.

If you are of the aged or spiced rum persuasion, both of these rums are well though out and the blending and making of them is another masterpiece of the 72 year old Legend of Cuban style Rums Francisco "Don Pancho" Fernandez.   Don't let a celebrity face on this bottle give you second thoughts, the contents are of the highest quality and a fine rum for the money.   Try it you will be surprised.  ;o)
Posted by Bahama Bob's Rumstyles at 8:26 AM No comments: