This year's celebration of  "Black Tot Day" is going to be a very special one, marking the 46th anniversary of the removal of the daily ration of rum from the British Royal Navy ships, Pusser's Rum is introducing their new Pusser's Gunpowder Proof expression to the United States.  This is the rum that was just awarded the trophy in the rum category at the International Spirits Challenge last month and a "Best in Class" at the 2016 RumXP event in Miami in April.

Pusser’s Gunpowder Proof Rum Leaps Across the Pond Aged Overproof Expression to Launch July 31 in Select U.S. Markets to Commemorate “Black Tot Day” Pusser’s Gunpowder Proof, the last rum issued by the modern Royal Navy to its enlistees in 1970, will launch in seven U.S. markets July 31 to commemorate the 46th anniversary of Black Tot Day. Gunpowder Proof is an aged overproof expression at 54.5 percent which was the formula last used by the Admiralty.   Pusser’s Rum Pusser’s Rum is produced in strict accordance with Admiralty blending specifications last used by the Royal Navy for issue to its fleet, a tradition which began in 1655 when it first served rum as its spirit of choice, with extra “tots” being offered before and after some of the most infamous battles in history. 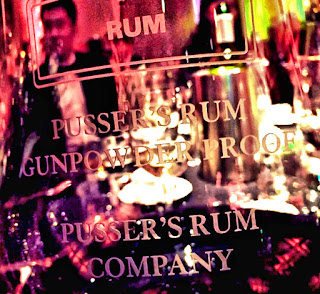 This is probably the best expression that Pusser's has produced to date.  The two existing wooden pot stills, first put in use in the early 1700's and located in Guyana’s Demerara River Valley, impregnate the rum with esters (naturally occurring organic flavoring compounds) far beyond those of any other rum. What results is a truly unique, award winning taste. The name “Pusser’s” is nothing more than a corruption of the word “Purser,” the Royal Navy ship’s supply officer who retained the stocks of rum. Before hydrometers, the ship’s Purser would test rum strength by mixing a few grains of gunpowder with rum to see if it would ignite under the heat of a magnifying glass. If it did that was 'proof' the rum was “at strength,” if it was not, the Purser was threatened with bodily harm for “watering down” the rum. “Gunpowder Proof is riding the wave of hand-crafted artisan spirits that are authentic and all-natural,” said Pusser’s CEO Gary Rogalski. “Forbes Magazine called the blend ‘the single malt of rum’ because of the painstaking batch process required to blend, bottle and bring the rum to market.


Posted by Bahama Bob's Rumstyles at 6:52 AM No comments: