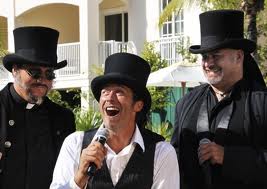 Key West is a rather old city with many many stories of historical relevance, but the ghost stories told nightly by the various "Ghost Tour" operators have  brought to light many interesting tales of haunted buildings, cites and dolls.     People are unusually interested in haunted houses and ghosts I'm finding out as I give people directions to  the many ghost tour operators here in Key West.      Not having the curiosity to take one of these tours myself, but listening to many of my patrons talk of going and having been on the tours made me wonder why.     Looking into Key West's history as I have there are many opportunities for the presents of ghosts of  famous people that died here under mysterious circumstances, there is the potential for the haunting of many of our structures.   Places like the Red Rooster Inn and the Doctors Inn, or even the a Doll.

"Robert the Doll" as it has become known as is the imaginary friend of Robert Eugene Otto, a Key West painter and author.    The doll was given to Eugene as a present from a family servant, who was by the way skilled in the arts of black magic and voodoo, in 1904.      Soon after it became clear that the doll was in deed very eerie.    The parents claimed that the heard Eugene talking to the doll and it seemed to be talking back to him.     Neighbors claimed to see the doll moving from window to window when there was no one at home.      When Eugene died in 1974, the doll was placed in the attic where it stayed until the house was resold and the new owners of the house found the doll and gave it to their 10 year old daughter.     Soon after getting the doll the little girl would wake up screaming in the middle of the night saying that Robert was moving about the room.     The stories of what mischief that Robert has caused are endless, but you can visit Robert at the East Martello Museum and make your own decision, by the way if you want to take his picture it is said that you must as nicely before you take it.

The Grave yards and the haunted houses of Key West make great stories and if you are interested in these tales, you need to sign up for one of the many enlightening Ghost Tours here in Key West.     ;o)
Posted by Bahama Bob's Rumstyles at 10:16 AM No comments: