The outbreak of World War II signaled the importance of Key West militarily to the U.S. Navy.   The existing Overseas Highway had many wooden bridges and sharp turns make it difficult for trucks carrying military equipment to reach Key West.   The Navy presence in Key West required stronger bridges to support its operations and security patrols.   Authorities at that point chose to utilize the entire route of the previous Florida East Coast railroad right of way, shortening the road by about 14 miles.

In the Upper Keys, a used drawbridge was installed at Jewfish Creek and the rail bed converted into a new highway from Key Largo to Florida City, bypassing Card Sound.  The Navy paved and upgraded the bridges to handle the very heavy loads of vehicles supplying parts and supplies to the Key West Base.  The Lower Keys faced similar problems and from Sugarloaf Key along the coastline to Stock Island was bypassed for the same reasons as the other areas, the new highway would run for the most part along the original railroad route.   Some of the remains of this route are still visible. This new route did however pass through the Boca Chica Naval Base, these were eventually rerouted to the outer perimeters of the base.  By creating the two bypasses, travel along the Overseas Highway was shortened by 17 miles, but at a cost of $5 million, authorized in February 1942.

Travel reasons were not the only considerations, the railroad bed through the Everglades was almost a direct route to the mainland, and a fresh water pipeline along with power and light transmission lines were built alongside Overseas Highway.

The official Overseas Highway dedication for this third major modification was given in July 2, 1944.  "I dedicate this road to the greatness of the Keys," said Governor Spessard L. Holland as he and his wife cut the ribbon atop the Bahia Honda Bridge. America had a road that allowed trucks, busses and autos to drive from Fort Kent, Maine to Key West along U.S. 1. This was a much larger celebration than the 1938 highway opening. 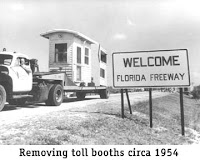 The railroad maintenance village on Pigeon Key served as headquarters for the Toll and Bridge Commission.   All construction, maintenance and operations were directed from this small island. Tolls were one dollar for the vehicle and driver, plus 25 cents for each passenger.   A increased pressure to drop the tolls resulted in the road tolls being lifted completely on April 15, 1954.

1944 to 1978 was mostly a period of maintenance period except for a few significant changes in the Upper Keys.  The road was widened to four lanes on the Island of Key Largo, Tavernier in 1966, then to Rock Harbor to Lake Surprise in 1971 - 1972 and finally the Tavernier to Rock Harbor section was completed.  In addition there was $1.1 million spent to repair the Long Key Bridge in 1966.       In fact, all the bridges were deteriorating from relatively heavy use in an extremely harsh salt-water environment.   The beginning of the end was signaled when chunks of concrete began falling off of the 1938 built Bahia Honda Bridge overhead concrete slab.   In 1968, it was announced that two two-lane concrete spans would replace the old elevated railroad bridge at a cost of $7.9 million in July 1969.   Dedication ceremonies were held in August of 1972 when a 1901 Oldsmobile replica was the first car to pass over the new bridge which lies alongside the original double decked bridge.   One by one, most of the old rail bridge crossings have been replaced.

Today the road is being maintained with a few up grades here and there, but for the most part it is how it is going to be for quite some time.   It is a road that took over a hundred years to come about and one of the engineering wonders of the world, but more important it provides the keys with a reliable means of coming and going to the mainland.