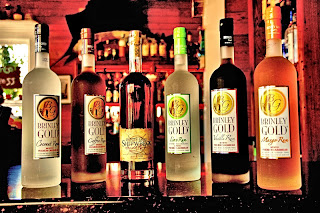 In the center of the Eastern Caribbean, lies the very special little island of St. Kitts, home to Brinley Gold Rums.     Originally the Brinley family was in the temperature sensor business in Fairfield. New Jersey, but coming to the conclusion that they could be more competitive by relocation to St. Kitts.    In the mid 90's, they were the biggest employer in St. Kitts, but introduction of the Far Eastern companies into the market and he lost his competitive edge and closed the factory.    The family really loved the island and they had this big factory building that was doing nothing at the time.     They decided to try their hand at the flavored rum business.

Originally they approached Cane Spirit Rotheschild also known as CSR to provide the rum, and a french blender named Michelle, and they were ready to start making "the best tasting flavored rums in the world".     They won their first competition at the St. Johns  International Rum Festival in Newfoundland, Canada.    25 years Later, they are still trying to get the right distribution for their rums and keep the spirit growing here in America.

Today they are getting their rum from Demerera in Guyana, their vanilla from Madascar, Mangos and coffee from Brasil, limes from Tahiti, and coconuts from all over the tropics.    Michelle is still the master blender and they are proud of their special rums that can be sipped or mixed.

We have the entire line of Brinley Rums at the the Rum Bar in Key West and they are used in a number of fine cocktails that we sell regularly.

Bahama Bob's Expresso
Place all ingredients into a shaker with ice and shake until chilled and pour into a collins glass.
Garnish with fresh ground hard chocolate and nutmeg.

This is only one of many uses for these very flavorful rums that rose from the demise of the temperature sensor factory in St. Kitts.   They seem to be available in 25 or more states these days, and well worth the effort to find them.   ;o)
Posted by Bahama Bob's Rumstyles at 8:50 AM 1 comment: