The Pina Colada has been a part of beach and tropical cocktail fair for as long as I can remember, but it really isn't that old of a cocktail. There seem to be several theories as to who really created the Pina Colada. The oldest story goes back to the 1800's and the pirate Roberto Cofresi also known as El Pirata Coefresi, he was said to have served his men cocktails that were a mix of white rum, coconut milk, and pineapple. The unfortunate part of the story is that when he died in 1825 the recipe died with him and is unverified.


There is the theory that the Spaniard Ramon Portas Mingot, who worked is some of the finest bars in Buenos Aires, and a writer of cocktail books, had met Chef Pepe Barrachina on a trip to South America. Pepe hired Ramon to be the head bartender in his San Juan Restaurant Barrachina. It is said that his experimentation yielded the "Pina Colada" in 1963.
The most believable of the theories was that on August 15, 1954, a man named Ramon "Monchito" Marrero introduced the Pina Colada at the Beachcomber Bar at the Caribe Hilton Hotel in San Juan. The Caribe Hilton was the moist famous hotel of the day and often hosted many of the high rollers and the star studded Hollywood clientele of the day. The hotel encouraged Ramon to experiment with many different ingredients to create the new Caribe Hilton signature drink. It too Ramon three months of blending, shaking and mixing ingredients to create the first Pina Colada. The story in verified by the fact that it uses cream of coconut, which was pioneered by "Coco Lopez" in 1954 by Ramon Lopez Irizarry at the University of Puerto Rico. 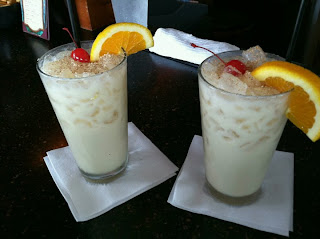 I know that I pretty much follow the original recipe, but instead of white rum, I substitute a "spiced rum" and top the drink with fresh ground nutmeg. These are some ideas that were introduced to me as I visited different islands in the Caribbean. Bahama Bob's pina colada does owe it roots to Ramon "Monchito" Marrero and his
Posted by Bahama Bob's Rumstyles at 8:12 AM No comments: