In an article in Caribbean 360, Barbados Prime Minister Freundel Stuart spoke out the the growing problem of the United States rum subsidies to the U.S. Virgin Islands and Puerto Rico and the ripple effect that it is having on the rest of the Caribbean rum producers. 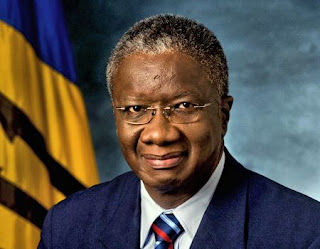 
Caribbean Community (CARICCOM) rum producing countries are holding high-level talks with the United States on resolving issues surrounding the rum industry in the region, Prime Minister Freundel Stuart has announced.
A government statement said that Prime Minister Stuart made the announcement as he addressed a ceremony unveiling a commemorative plaque for Mount Gay Distilleries’ New Aging Bond earlier this week.
Prime Minister Stuart said the discussions, which are also being attended by officials from the Dominican Republic, were necessary since, within recent time, subsidies had been given to rum producers in the United States Virgin Islands and Puerto Rico, much to the disadvantage of Caribbean rum producers, including Barbados.
He said the situation is so serious that Barbados is prepared to take its case to the World Trade Organization (WTO) if a solution is not forthcoming.
“The Government of Barbados has had to take a stand on this issue, and under my instructions, the Ministry of Foreign Affairs and Foreign Trade communicated with the US Government on this issue. And, of course, very recent discussions have taken place between CARICOM countries, the Dominican Republic and the United States Trade Representative with a view to addressing the more pressing concerns of rum producers, not only here in Barbados, but in other parts of the Caribbean, and, of course, in the Dominican Republic,” he said.
Prime Minister Stuart said that CARICOM was not going to “relapse its vigilance” on the issue.
“We are not about to relax our persistence on this issue… We do not intend to allow rum producers in the Caribbean to be so severely disadvantaged by this market distortion which has resulted from these overwhelming, if I may use that word, subsidies being extended to producers in the US Virgin Islands and Puerto Rico.”
Last month, the CARICOM Council for Trade and Economic Development (COTED) said  the region continues to have “serious concerns” regarding the competitiveness of Caribbean rum in the United States.
"In addition to being the largest agriculture-based export industry in CARICOM, the rum industry is a substantial employer and a major contributor to foreign exchange earnings and government revenues," COTED said.
CARICOM Secretary General Irwin LaRocque said that the rum issue, involving Diageo, the global rum producer, continues to "threaten Caribbean rum into the US market, and the leaders agreed that strong and urgent political intervention was needed to address that issue.
"There is a concern with regards to some subsidy that is being provided for Diageo, the multilateral and one of the largest rum producers which is currently located in St Croix in the US Virgin Islands," said LaRocque.
"Last August, the UK-based Diageo reportedly warned that should CARICOM mount a complaint to the WTO over the alleged subsidies it would "re-evaluate" its Caribbean interests.
Diageo has denied 'flooding' the US market and has defended the US governments 100-year-old 'cover over' programme, which it said granted the USVI and Puerto Rico much-needed revenues to promote economic stability and fiscal autonomy.
Prime Minister Stuart has assured rum producers in Barbados that his administration “is alert to your concerns on this issue, and that CARICOM and the Dominican Republic are working collaboratively to ensure that we reach some kind of resolution on this matter”.
Stuart said rum “has steadily become a serious foreign exchange earner for Barbados” adding “you really cannot run a country like Barbados, a small open economy, unless you have reliable sources of foreign exchange.
“And, the rum industry has been making its own contribution to Barbados’ gathering of foreign exchange needs to make life more tolerable and more abundant for the people of our island.
“So, we cannot afford to ignore threats to the industry. Threats to the industry are not for us a luxury, but we have to take these threats seriously and spring into action to protect the industry wherever these threats occur,” he added.

Read more: http://www.caribbean360.com/news/barbados_news/656394.html#ixzz2IcO1eIfH
On the heels of the "Fiscal Cliff" legislation that .extended the rum subsidies to the U.S. territories, this is what I feel is only the beginning of the latest round of actions in this ongoing dispute.
Posted by Bahama Bob's Rumstyles at 9:14 AM 2 comments: