I ran across an interesting article by Wayne Curtis about "children's cocktails", and particularly the  "Shirley Temple herself, before she died in 2014 at the age of 85, recalled that she’d first been served her namesake drink at the Brown Derby in L.A."
"Shirley Temple".


The Shirley Temple is the most enduring non-alcoholic drink that ever had the temerity to mimic the sophistication of an actual cocktail.   Watching kids order and sip Shirley Temples at a restaurant is "adorable".     "I have several objections to the drink, but none are about kids pretending to be adults", playing adult is how they learn.   It’s what they’re being served, and therefore what they’re learning, that’s wholly objectionable.
The recipe for the Shirley Temple varies slightly depending on where it’s served. But generally it’s a concoction of ginger ale (or sometimes 7Up) mixed with a little grenadine and served in a highball glass. The essential coup de grace? A cherry the color of a shiny new fire engine. That’s what made it sophisticated for kids.   What is a Shirley Temple? It is sweet mixed with sweet, garnished with a crimson dollop of sweet. It’s an underground bunker of a drink, able to withstand direct assault.
"I’m not the only one who objects to the Shirley Temple", Shirley Temple never really liked it either.    “It is a saccharine sweet, icky drink?” she replied to an NPR interviewer who asked her about the drink in 1986.    “All over the world, I have been served my namesake, because, people think it’s funny.  I hate them.”  When asked why?, she replied, “Too sweet!”.
Read More at http://www.thedailybeast.com/articles/2016/07/20/the-shirley-temple-s-effect-on-four-generations-of-cocktail-drinkers.html 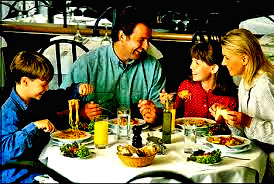 I really have to agree with Wayne that it is a really bad drink, but for slightly different reasons.  One of the most important things that young children need to learn when they are out in public is how to behave and good manners.  The last thing that needs to be done if you are truly trying to enjoy going out with your children is a "ton of sugar".  Children are hyper enough, they don't need a stimulus that make them more hyper when you are trying to teach them to be quiet and act appropriately.   There are many other possibilities that are not laded with sugar.

Posted by Bahama Bob's Rumstyles at 6:05 AM 2 comments: