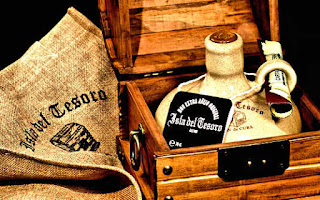 “Santiago de Cuba is considered one of the best rums in Cuba”.   Cheaper bottles are aged from three to five years, but rum aged 20 to 25 years also is available, and the price goes up accordingly.  Among the most expensive bottles for sale are Isla de Tesoro (Treasure Island), available in a special ceramic jug and packed in a wooden chest, made to celebrate the 500th anniversary of the city of Santiago.  Isla de Tesoro sells for about $747, which was produced in a limited edition, and the favorite of the late Fidel Castro.  “This is a rum that you won’t find everywhere or even all over Cuba.”  Cuban rum brand Isla del Tesoro, once produced for revolutionary Fidel Castro, has been made available in the UK through distributor Spirit Cartel.   “It’s a rum for connoisseurs and aficionados. In my opinion, no rum collection is complete without a bottle of ‘El Caballo’s’ personal rum.   We can all be a little Fidelista even if we are not communist.”
For 50 years Isla del Tesoro, or ‘treasure island’, was distilled for Castro’s personal consumption; gifted to visiting international dignitaries and senior members of Cuban government. Until recently the rum was not commercially available, and even now production is limited.   The original recipe for Isla del Tesoro was created from a collection of rums appropriated by the Cuban State from rum-producing families fleeing the Revolution. They were discovered in 1959 ageing in a cellar nicknamed the ‘Cathedral of Light Rum’.

There’s also a Bacardi connection to the rum factory in Santiago. It’s the old Bacardi factory, which was expropriated by the Cuban government on Oct. 15, 1960, along with the company’s Santiago headquarters. The day before, the Bacardi sales office in Havana was nationalized.  Bacardi, which is now headquartered in Bermuda, had made rum in Cuba since 1862. 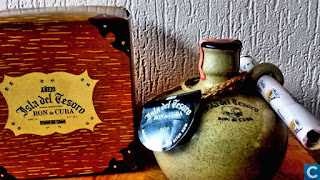 The rum is presented in an individually-numbered ceramic decanter encased in a handmade wooden chest.   A map accompanies the bottle, depicting the location of Isla del Tesoro, now called Isla de la Juventud.  Charles Marshall, Spirit Cartel, said: “Isla del Tesoro is truly the stuff of legend. We feel it’s our own little revolution and certainly a piece of history, just getting our hands on the UK distribution for the rum.   “The romance surrounding this rum, contributes to the myth that it has come to represent the Cuban people’s soul: pure and full of spirit, whilst maintaining a real sense of dignity and elegance.
Posted by Bahama Bob's Rumstyles at 5:23 AM No comments: