Taking Care of Business The Story of Raul Vasquez

Raul Vasquez owned what is now the Speakeasy Inn and Rum Bar during Prohibition.   This is a great story adapted from an article in Martello, a publication of the Key West Art & Historical Society, from 1967­ ten years after Raul Vasquez passed away.


This is a true tale of one Raul Vasquez, an enterprising resident of Duval Street who needed to provide for his family and knew of a way to get it done. 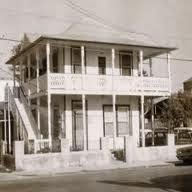 Prohibition was a sad state of affairs visited upon those United States citizens who occasionally liked to indulge their taste for alcohol. For almost four years, it was illegal to manufacture, import, export or sell the spirit. Government Agents busted distilleries and raided speakeasies in cities around the country. But who was looking at a little island down off the coast of Florida? Only the drinkers (and those who supplied them,) it seemed.

Key West was a wide-open city, and both residents and tourists alike kept suppliers working night and day bringing in boatloads of rum from Havana. There were few legitimate, good paying jobs in 1930's Key West, so in order to make ends meet, Raul Vasquez decided to become an supplier..


He had never been to Cuba, but he knew it was 90 miles south of Key West. He knew there was rough water, but he had been out in the Gulf Stream many times and wasn't afraid.


He had a small but sturdy boat with a pretty good engine that he figured would average about five miles an hour, so that he ought to be able to make the journey to Cuba in a day and a night.

Navigation had never been a matter of special interest to him, as he went from Island to Island and had never got lost. But since Cuba was away over the horizon Raul felt that he should have some means of knowing exactly in what direction he was going. He bought a small compass and discussed its use with some of his fishermen friends.


He also needed some assistance­ someone to load and unload the cases of liquor he expected to acquire, and so he got a waterfront character who had been out with him before. Then, with some water jugs and plenty of gasoline, they headed out to sea, generally following the path taken by steamers. Inasmuch as the one-man crew did not know their destination, he didn't show alarm until the boat was well out of sight of land.

As this occurred when night was coming on, Raul suddenly had a mutiny on his hands and was obliged to use his pistol to keep the "crew" subdued. 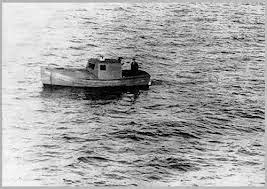 Also, Raul noticed that his compass acted peculiarly when he moved one way or another around the engine, and that the needle seemed to point at the engine rather than "due north." This presented a problem, but Raul had heard that a boatman could steer by the stars, and so he tried to keep going in a direction consistent with a star that he chose. Somehow, he made it to Cuba, though not on the schedule he had set for himself and not anywhere near Havana.

It took him five days, in fact, to get to the capital and pick up his load of liquor. The mutineer accepted the situation and helped load the boat. The dealer who was supplying the bottled goods thought Raul's boat was merely a dinghy and that he was going to transfer his cargo to a larger boat outside the harbor.
Raul got some more information about navigating before setting out on the return journey because Key West, he could readily see, was not going to be very easy to find.

He had engine trouble, and the heavily overloaded boat floated helplessly and perilously in some very rough seas for many hours. They came close to running out of fresh water, and Raul was a very tired and bewildered and worried man, but he refused to lighten the boat.

He was somewhere in the vicinity of Big Pine Key when he finally sighted land. He made for shore and encountered another boatman from whom he tried to buy water, gasoline and food. The man, however, suspected Raul had liquor aboard and he demanded some of it. Raul had to give in, and surrendered a single bottle. He boasted for years that, after all he had gone through bringing the rum back to Key West, he'd only lost that single bottle.