For years now, I have worked hard to cut down the amount of sugar I put into my cocktails and still be able to have an enjoyable flavor.   Ernest Hemingway once told Constante Ribalaigua , famed barman and owner of the El Floridita in Havana to delete the sugar and double the rum in his daiquiri.  This provided a very tart and tasty daiquiri that still lives on today as the Papa Doble or Hemingway Special.


There is a trend in the making now for a much tarter line of cocktails in New York.  "That's how the wind has been blowing," said Kevin Denton, the creative bar director at the restaurant Alder in New York. "There has generally been a backlash against decades of overly sweet cocktails."   This is something that I have felt for years, especially in the line of the "high fructose corn syrup" chemical flavorings out there for use in the sickish sweet "sugar bombs" that have been popular for many years. 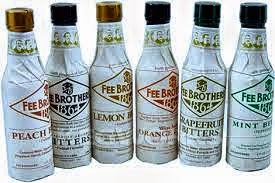 The prohibition years were filled with very tart cocktails that featured "vulgarized" vegetables and fruits.   Today there is a huge switch to a variety of bitters being experimented with to give the cocktail an unusual flavor without the use of sugar.  "Bitters is one of the flavors that has been deeply explored. The second stage is the nuance of bitters as modifiers," said Alex Day, co-owner of the bar Death & Co in New York.
If the public takes to these tart cocktails the way that they have taken to the "Papa Doble", this could be a really fun year in the cocktail industry.  Tart cocktails go back as far as Ancient Egypt and China relating to their use of herbs to flavor alcohols.   I think that this will be a welcome trend, with the reduction of sugar in the cocktails, this should also help reduce the number and severity of the hangovers the next day.  ;o)
Posted by Bahama Bob's Rumstyles at 7:00 AM No comments: