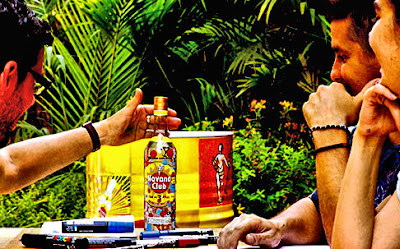 Nick Blacknell, global marketing director for Havana Club, said: “The limited edition Havana Club 3 Years Old ‘By Hand’ bottle reinforces our long-term commitment to supporting local Cuban artists, who otherwise would not have a chance to showcase their artwork on a global scale.”   Havana Club 3 Years Old ‘By Hand’ will be available in Germany from March and will later launch in markets including France, Austria, Netherlands, Portugal and China.
Earlier this month, Havana Club extended its Havana Club Tributo Collection with the launch of a rum finished in smoky whiskey casks.


Posted by Bahama Bob's Rumstyles at 5:42 AM No comments: